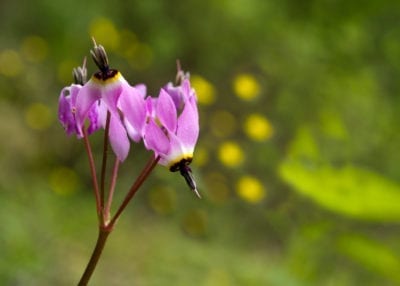 Shooting star is a lovely native North American wildflower that is not just restricted to wild meadows. You can grow it in your perennial beds and it makes a great choice for native gardens. There are many different shooting star varieties to choose from to add stunning colors to your native and wildflower beds.

Shooting star gets its name from the way the flowers hang from tall stems, pointing downward like falling stars. The Latin name is Dodecatheon meadia, and this wildflower is native to the Great Plains states, Texas, parts of the Midwest, and Canada. It is rarely seen in the Appalachian Mountains and northern Florida.

This flower is most often seen in prairies and meadows. It has smooth, green leaves with upright stems that grow to 24 inches (61 cm.). Flowers nod from the tops of the stems, and there are between two and six stems per plant. The flowers are usually pink to white, but there are many different Dodecatheon species now cultivated for the home garden with more variation.

This is a beautiful flower for any type of garden, but it is especially desirable in native plant beds. Here are some examples of the many different kinds of Dodecatheon now available to the home gardener:

Shooting star is a great plant to start with when planning a meadow garden or a native plant bed. With the multiple varieties, you can choose from a range of traits that will add visual interest to your final design.

Printer Friendly Version
Read more about Shooting Star Flowers
<PreviousNext>
Did you find this helpful? Share it with your friends!
FacebookTweetPinEmail
Related Articles
Newest Articles
You might also like…
Additional Help & Information