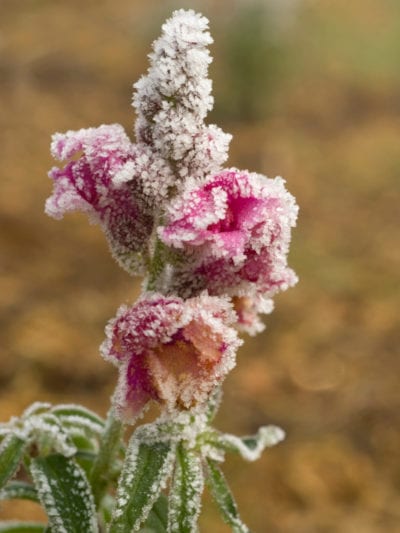 Snapdragons are one of the charmers of summer with their animated blooms and ease of care. Snapdragons are short-term perennials, but in many zones, they are grown as annuals. Can snapdragons survive winter? In temperate zones, you can still expect your snappies to come back the next year with a little preparation. Try some of our tips on overwintering snapdragons and see if you don’t have a lovely crop of these puffed blooms next season.

The United States Department of Agriculture lists snapdragons as hardy in zones 7 to 11. Everyone else will have to treat them as an annual. Snapdragons in the cooler zones can benefit from some protection from winter’s chill. Snapdragon winter care is a “snap,” but you have to be proactive and apply a little TLC to these babies before freezing temperatures make their appearance.

Snapdragons grown in hotter zones perform best when planted in the cool season. That means if your zone has hot summers and mild winters, use them as fall and winter plantings. They will suffer a bit in the heat but rebloom in fall. Temperate and cooler regions use the flowers in spring and summer. Once the cold season approaches, blooms fall off and buds stop forming. Foliage will die back, and plants will melt into the ground.

Temperate zone gardeners don’t have to worry about overwintering snapdragons, as they generally sprout right back when soil softens, and ambient temperatures warm up in spring. Gardeners in areas with severe winter weather will have to take more steps when preparing snapdragons for winter unless they simply want to reseed or purchase new plants in spring.

My region is considered temperate, and my snapdragons freely reseed themselves. A thick coating of leaf mulch is all I ever need to do to the bed in fall. You may also choose to use compost or fine bark mulch. The idea is to insulate the root zone from cold shock. It is helpful to pull back the organic mulch in late winter to early spring so the new sprouts can easily come through the soil.

Snapdragons in winter temperate zones will simply compost back into the soil or you can cut plants back in fall. Some of the original plants spring back in the warm season but the numerous seeds that were self-sown freely sprout as well.

Our northern friends have a tougher time saving their snapdragon plants. If sustained freezes are part of your local weather, mulching might save the root zone and allow the plants to regrow in spring.

You can also dig up the plants and move them indoors to overwinter in the basement or garage. Provide moderate water and medium light. Increase the water and fertilize in late winter to early spring. Gradually reintroduce the plants to the outdoors in April to May, when temperatures have begun to warm, and soil is workable.

Alternatively, harvest seeds as the plants begin to die back, usually around September or early October. Pull dried flower heads and shake into bags. Label them and save them in a cool, dry, dark area. Start snapdragons in winter indoors six to eight weeks before the date of the last frost. Plant the seedlings outdoors in a prepared bed after hardening them off.

Printer Friendly Version
Read more about Snapdragons
<PreviousNext>
Did you find this helpful? Share it with your friends!
FacebookTweetPinEmail
Related Articles
Newest Articles
You might also like…
Additional Help & Information