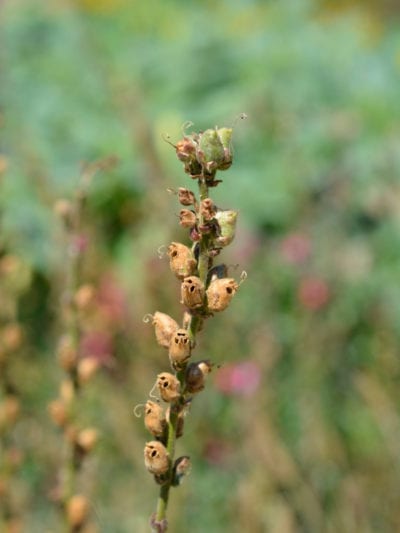 Snapdragons are familiar, old-fashioned flowers named for the blooms that resemble little dragon jaws that open and close when you gently squeeze the sides of the flowers. The segmented blooms must be pollinated by big, strong bumblebees because honeybees aren’t sturdy enough to open the jaws. Once the pollinated blooms die back, another unique feature of the plant is revealed – the snapdragon seed heads. Read on to learn more.

When the snapdragon flowers die, the dried seed pods, which look like tiny, brown, shrunken skulls, prove just how beautiful and strange nature can be. Watch for the seed pods in late summer, then get your camera because your friends will never believe it!

The odd-looking seed heads have been the source of legends for hundreds of years. One story says that women who eat the skull-like seed heads will regain their lost youth and beauty, while some people believed a few of the mystical little pods scattered around the house would protect the residents from curses, sorcery, and other forms of evil.

Harvest a few of those spooky seedpods and you can save snapdragon seeds for planting next spring. Read on to learn about snapdragon seed collecting.

How to Harvest Snapdragon Seeds

Snapdragon seed collecting is fun and easy. Be sure the pods are dry, then pinch them from the plant and shake the dry, brittle seeds into your hand or a small bowl.

If you can’t hear the seeds rattling in the pods, let the pods dry for a few more days before harvesting. Don’t wait too long though; if the pods burst, the seeds will fall on the ground.

How to Save Snapdragon Seeds

Put the seeds in a paper envelope and store them in a cool, dark place until spring planting time. Don’t store the seeds in plastic because they may mold.

Harvesting snapdragon seeds is that simple!