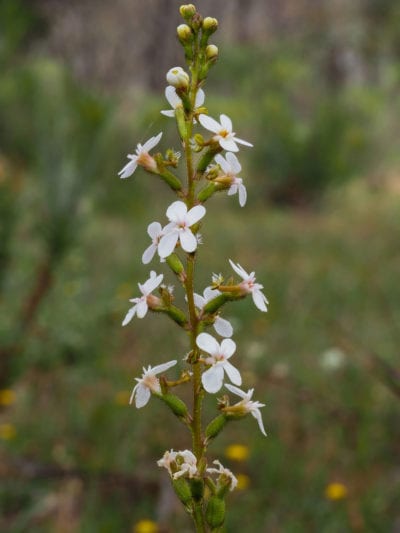 Most plants require the pollinator to do the work of collecting pollen, but in western Australia and parts of Asia, a native herb sits in wait for unsuspecting insects to land on the flower seeking its nectar. At just the right moment, a long-handled club reaches out from under the petals and slaps pollen onto the visiting insect.

More than 150 species of the trigger-happy plants reside in the southwest part of western Australia, the largest concentration of the fascinating flowers, accounting for 70 percent of trigger plants worldwide.

The club, or column as it is called, found on the trigger plant contains both the male and female reproductive parts (stamen and stigma). When the pollinator lands, the stamen and stigma take turns with the leading role. If the insect is already carrying pollen from another Stylidium, the female part can accept it, and voila, pollination is complete.

The column mechanism is triggered by the difference in pressure when a pollinator lands on the flower, causing a physiological change that sends the column toward the insect with the stamen or the stigma doing its thing. Extremely sensitive to touch, the column completes its mission in only 15 milliseconds. It takes anywhere from a few minutes to a half hour for the trigger to reset, depending on the temperature and the specific species. Cooler temperatures seem to correspond to slower movement.

The flower arm is precise in its aim. Different species strike at different parts of the insect and consistently so. Scientists say that helps to avoid self-pollination or hybridization between the species.

Trigger plants thrive in varying habitats including grassy plains, rocky slopes, forests, and alongside creeks. The species S. graminifolium, which is found across Australia, can tolerate a wider range of habitats since it is used to greater diversity. Trigger plants native to western Australia tend to be cold hardy to 28 to 30 degrees F. (-1 to -2 C.).

Certain species can be grown in most of the United Kingdom and the United States as far north as New York City or Seattle. Grow trigger plants in a moist medium that is nutrient poor. Avoid disturbing the roots for healthier plants.