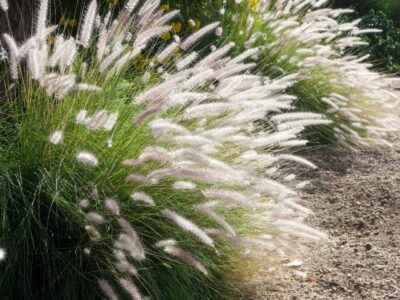 About Varieties of Fountain Grass

Fountain grass plants (Pennisetum alopecuroides) are native to Eastern Asia and Australia where they are found growing along streams, in meadows, and open woods. Fountain grass plants have deep green, clumping foliage that initially grows upright but as the plant matures, begins to gracefully arch resembling a spouting fountain.

Plants attain a height of 12-48 inches (30 cm. to just over a meter) depending upon the fountain grass cultivar. Each fountain grass variety varies in the length and width of its leaves, but all are long, tapering, and minutely serrated.

The swaying foliage adds movement and drama to the landscape during the growing season and thereafter. During the summer months showy white to pink, to purple, to copper flower spikes are produced. In the fall, the foliage turns an orange/bronze tone fading to a dull tan during the winter months. Provided the flower stalks are not cut they still provide winter interest.

How to Grow Fountain Grass Cultivars

Once established, the plants are quite drought tolerant, although the tips of the foliage may dry and brown. Fountain grass varieties are only somewhat hardy in the northern regions of zone 5 so expect the crown to die back in some cases during the winter.

With few pest problems and deer resistance, not to mention the sheer variety of fountain grass cultivars, there’s bound to be a Pennistetum for you. The following information is in regard to some types of fountain grass but is by no means a comprehensive list.

‘Cassian’ is named for the German horticulturist Cassian Schmidt is similar in size to the common ‘Hameln’ with dusky brown blooms and gorgeous gilded red tinted foliage in the fall. It is suited to zones 5 and 6.

‘Fox Trot’ is taller than ‘Cassian’ with rosy to black blooms. It is said to be hardy to USDA zone 4 although it tends to suffer winter dieback in some areas.

The aforementioned ‘Hameln’ is one of the hardiest (and most common) of the varieties of fountain grasses, hardy to zone 5 but often grown in zone 4 landscapes. It is a compact variety that grows 18-24 inches (46-61 cm.) tall with brilliantly green foliage and silvery-white blooms. It blooms a couple weeks earlier than most other fountain grass plants and is less apt to re-sow itself as well.

‘Little Bunny’ is a relatively tiny variety at only around a foot tall that blooms fairly consistently from midsummer through fall. As the name suggests, the small inflorescences look much like bunny tails.

‘Little Honey’ is a variegated version of ‘Little Bunny’ albeit much smaller. It has green leaves outlined in white with tan inflorescent plumes that reach 6-12 inches (15-30 cm.). Due to its smaller stature, it needs to be placed in an area where it can be seen such as in a rock garden.

Black fountain grass (‘Moudry’) isn’t exactly black but more a deep maroon. The dark blooms appear later in the season (3-5 weeks later) than other fountain grass cultivars but is a vigorous grower with wide leaves and a multitude of upright inflorescences. It seeds readily in warm climes and it hardy to zone 6.

‘National Arboretum’ is similar to ‘Moudry’ with dark, almost black blooms late in the season. It is, however, better flowering than ‘Moudry.’ It also tends to self-sow and is hardy to zone 6, maybe even zone 5.

‘Redhead’ has big burgundy inflorescences and is derived from ‘National Arboretum’ although it blooms earlier.
‘Weserbergland’ is yet another dwarf variety of fountain grass that grows to only two to three feet (half to just under a meter) in height.

Printer Friendly Version
Read more about Fountain Grass
<Previous
Did you find this helpful? Share it with your friends!
FacebookTweetPinEmail
Related Articles
Newest Articles
You might also like…
Additional Help & Information