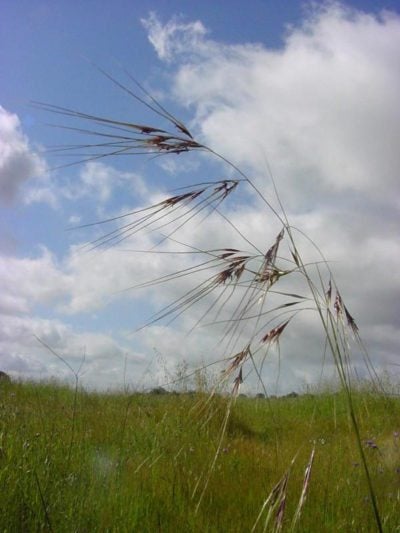 What is Purple Needlegrass?

Scientifically known as Nassella pulchra, purple needlegrass is native to the coastal hills of California, ranging from the Oregon border south to Baja, California. It is believed that before European settlement, purple needlegrass was the dominant bunch grass species in the state. However, it reached near extinction until recent conservation and restoration projects shed light on this almost forgotten plant.

While these needle-sharp seeds help the plant to self-sow, it caused ranchers to grow other, less harmful, non-native grasses for livestock forage. These non-native species began to dominate California pastures and fields, choking out native purple needlegrasses.

Purple needlegrass, also known as purple stipa, can grow in full sun to part shade. It is found growing naturally, or through restoration projects, on California’s coastal hills, grasslands, or in chaparral and oak woodlands.

Usually considered an evergreen grass, purple needlegrass grows most actively from March to June, producing the loose, feathery, slightly nodding, cream-colored flower panicles in May. In June, flowers turn a purple color as they form their needle-like seeds. Purple needlegrass flowers are wind pollinated and its seeds are dispersed by wind too.

Their sharp, needle-like shape allows them to easily pierce the soil, where they quickly germinate and establish. They can grow well in poor, infertile soils. However, they will not compete well with non-native grasses or broadleaf weeds.

Although purple needlegrass plants grow 2 to 3 feet (61-91cm.) tall and wide, their roots can reach depths of 16 feet (5 m.). This gives established plants excellent drought tolerance and makes them perfect for use in xeriscape beds or for erosion control. The deep roots also help the plant survive fires. In fact, prescribed burning is recommended to rejuvenate old plants.

There are a few things to be aware of, however, before growing purple needlegrass. Once established, plants do not transplant well. They can also cause and irritate hay fever and asthma. The needle-sharp seeds of purple needlegrass have also been known to get tangled up in pet fur and cause skin irritations or lacerations.