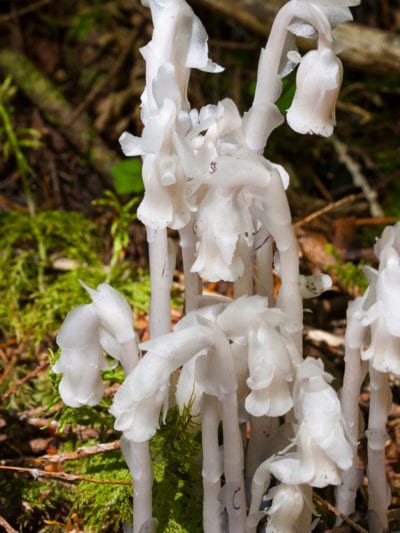 What is Indian pipe? This fascinating plant (Monotropa uniflora) is definitely one of nature’s weird wonders. Because it has no chlorophyll and doesn’t depend on photosynthesis, this ghostly white plant is able to grow in the darkest of forests.

Many people refer to this strange plant as Indian pipe fungus, but it is not a fungus at all – it just looks like one. It is actually a flowering plant, and believe it or not, it is a member of the blueberry family. Keep reading for more Indian pipe info.

Each Indian pipe plant consists of one 3- to 9-inch (7.5 to 23 cm.) stem. Although you may notice small scales, no leaves are required because the plant does not photosynthesize.

A white or pinkish-white, bell-shaped flower, which appears sometime between late spring and fall, is pollinated by small bumblebees. Once the bloom is pollinated, the “bell” creates a seed capsule that eventually releases tiny seeds into the wind.

For obvious reasons, Indian pipe is also known as “ghost plant” – or sometimes “corpse plant”. Although there is not an Indian pipe fungus, Indian pipe is a parasitic plant that survives by borrowing nutrients from certain fungi, trees and decaying plant matter. This complicated, mutually beneficial process allows the plant to survive.

Where does Indian Pipe Grow?

Indian pipe is found in dark, shady woods with rich, moist soil and plenty of decaying leaves and other plant matter. It is commonly found near dead stumps. Indian pipe is often found in near beech trees too, which also prefer damp, cool soil.

The plant grows in most temperate regions of the United States, and is also found in northern parts of South America.

Indian pipe has an important role to play in the ecosystem, so please don’t pick it. (It will quickly turn black, so there’s really no point.)

The plant may have once held medicinal qualities. Native Americans used the sap to treat eye infections and other ailments.

Reportedly, Indian pipe plant is edible and tastes something like asparagus. Yet, eating the plant is not recommended, as it may be mildly toxic.

Although the plant is interesting, it is best enjoyed in its natural environment. Bring a camera to capture this ghostly, glowing plant!