What Is Earthstar Fungus: Learn About Star Fungi In Lawns 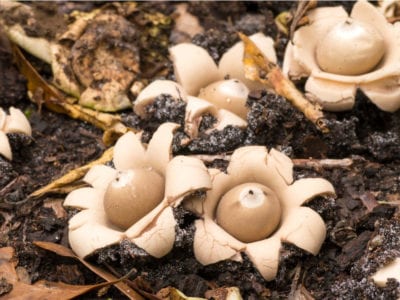 What is earthstar fungus? This interesting fungus produces a central puffball that sits on a platform consisting of four to ten plump, pointed “arms” that give the fungus a star-shaped appearance. Keep reading for more earthstar plant info.

Earthstar fungus isn’t hard to spot because of its distinct, star-like appearance. The colors aren’t star-like though, as the oddly beautiful earthstar fungus displays various shades of brownish-gray. The central puffball, or sac, is smooth, while the pointy arms have a crackled appearance.

This interesting fungus is also known as barometer earthstar because it reacts to the level of humidity in the air. When the air is dry, the points fold up around the puffball to protect it from weather and from various predators. When the air is moist, or when it rains, the points open and expose the center. The “rays” of the earthstar can measure from a ½ inch to 3 inches (1.5 to 7.5 cm.).

Earthstar fungus has a friendly relationship with a variety of different trees, including pine and oak, as the fungus helps the trees absorb phosphorus and other elements from the earth. As the tree photosynthesizes, it shares carbohydrates with the fungus.

This fungus prefers loamy or sandy, nutrient-poor soil and often grows in open spaces, usually in clusters or groups. It is sometimes found growing on rocks, especially granite and slate.

There isn’t too much you can do about star fungi in lawns because the fungus is busy breaking down old tree roots or other decaying underground organic material, which returns the nutrients to the soil. If the food sources eventually go away, the fungi will follow.

Don’t worry too much about star fungi in lawns and keep in mind that it’s just nature doing its thing. In fact, this unique star-shaped fungus is actually quite interesting!