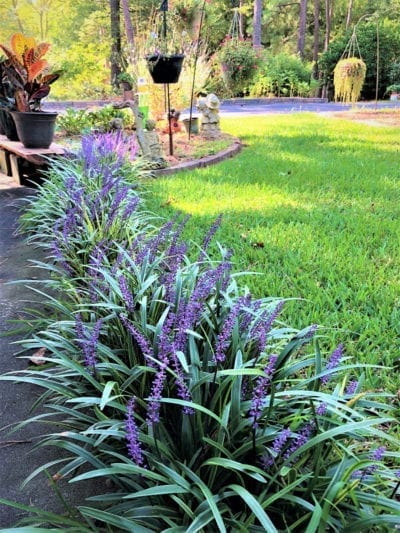 Looking for a low growing, drought tolerant turf replacement? Try growing monkey grass. What is monkey grass? Rather confusingly, monkey grass is actually the common name for two different species. Yes, things could get a little muddled here, so keep reading to learn about the different types of monkey grass and how to use monkey grass in the landscape.

What is Monkey Grass?

Dwarf mondo grass has thinner leaves and a finer texture than liriope. As a group, both are referred to as lilyturf.

There are quite a few types of monkey grass belonging to one of two genera: Liriope or Ophiopogon.

Of these varieties, the most commonly used is L. muscari, which is a clumping form. L. spicata, or creeping liriope, is best used in difficult areas such as on hillsides. It is an aggressive spreader and should only be used in areas that need full coverage, as it will choke out other plants.

Of the Ophiopogon genus, the monkey grass most commonly used is O. japonicus, or mondo grass, with fine, dark colored leaves that thrive in shaded areas. There is also the impressive black mondo grass which adds a touch of drama to the landscape. The most popular varieties are Nana, Nippon, and Gyoku-ryu.

How to Use Monkey Grass

Most liriope grows to 10-18 inches (25-46 cm.) in height, although the clumping type spreads to 12-18 inches (30-46 cm.) across. This evergreen groundcover blooms from July to August with white, pink, or purple hued blooms. These spiked blossoms provide a showy contrast against the green foliage and are followed by clusters of black fruit.

Dwarf mondo grass is most often used as a replacement for turf grass, but may also be grown in containers or used as a stand-alone plant.

Once established, both of these “monkey grass” varieties require very little maintenance, as they’re fairly drought tolerant, pest resistant and only needs mowing or pruning once annually. In the lawn, foliage should be mowed in the late winter prior to new growth. Set the mower at its highest cutting height and take care not to injure the crown.

Varieties of liriope can be divided every three or four years if additional plants are desired; however, this is not necessary.

Printer Friendly Version
Read more about Monkey Grass
Next>
Did you find this helpful? Share it with your friends!
FacebookTweetPinEmail
Related Articles
Newest Articles
You might also like…
Additional Help & Information