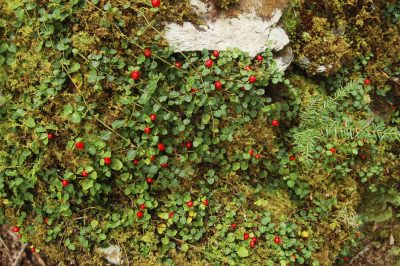 Partridgeberry information tells us that the vine is native to North America. It grows in the wild from Newfoundland to Minnesota and south to Florida and Texas.

Partridgeberry might have more common names than any other vine, however, so you may know the plant by another name. The vine is also called squaw vine, deerberry, checkerberry, running box, winter clover, one berry, and twinberry. The name partridgeberry came from the belief in Europe that the berries were eaten by partridges.

The partridgeberry vine forms large mats in the area they are planted, branching, and putting down roots at the nodes. Each stem can be up to a foot (30.5 cm.) long.

The flowers produced by the vine bloom in early summer. They are tubular with four petals, varying in size from 4 to 12 inches (10-30.5 cm.). The flowers grow in groups of two, and when they are fertilized, the ovaries of the twin flowers meld to form one fruit.

The red berries remain on the plant all winter long, even for an entire year if left alone. However, they are usually consumed by wild birds like partridge, bobwhites, and wild turkeys. Larger mammals eat them too, including foxes, skunks, and white-footed mice. While they are edible for humans, the berries don’t have much taste.

If you decide to start growing partridgeberries, you need to find a site with well-draining soil rich in humus. The vine prefers sandy soil that is neither acidic nor alkaline. Plant the vines in an area with morning sun but afternoon shade.

If you want to propagate partridgeberry, dig up a section of established plants and transfer it to a new area. This works well since the vine typically roots from nodes.

Gardeners love growing partridgeberry in winter gardens. During the cold winter days, partridgeberry ground cover is a delight, with its dark-green foliage and scattered blood-red berries. The birds welcome the berries too.