Getting Rid Of Periwinkle Plants: Learn About Periwinkle Control Methods 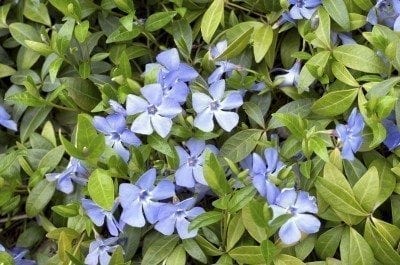 Periwinkle, also known as Vinca or creeping myrtle, is one of the easiest to grow groundcovers or trailing plants. However, its tendency to root at the internodes where stems touch the ground can make it an invasive competitor to other plants. Getting rid of periwinkle takes some serious elbow grease unless you wish to resort to chemicals. There are at least two useful periwinkle control methods in the following text.

Periwinkle is a very popular groundcover due to its glossy evergreen leaves and bright starry blue flowers. The plants establish and grow quickly, with remarkable tolerance to poor soils, unfavorable weather conditions, and even mechanical damage. Mowing or string trimming the plant to keep it in a manageable condition works well in containing the tangled stems. Be cautious with the trimmings though, as periwinkle will produce new plants with just a tiny bit of stem to ground contact, even once severed from the parent plant. This creates an issue, and many gardeners evince the desire to completely remove periwinkle groundcover.

It may seem sensible to just pull the plants, but any little bit of plant material or the presence of underground stems will send Vinca growing thickly again in no time. The waxy leaves are quite resistant to chemical herbicides as the cuticle repels any topical application. Control of periwinkle must remove all of the roots and stems to prevent recurrence. Periwinkle is not edible to grazing animals due to a milky latex sap. Manual removal is the least toxic method but the roots may grow several feet (1 m.) in the ground so deep digging is necessary.

Control of Periwinkle with Herbicides

Several states classify periwinkle as an invasive weed. For periwinkle weed control in large areas where digging is not practical, use an oil-based herbicide. The cuticle on the leaves repels water-based applications, but the oil base will allow the chemicals to adhere to the leaves and gradually travel into the vascular system of the plant.

Triclopyr mixed with mineral oil is effective but applications will need to be repeated as straggler plants crop up. Getting rid of periwinkle generally takes several seasons no matter what method you choose because of its hardiness and tenacity. Spray in winter when all other nearby vegetation has died back.

Alright, it sounds like a pain in the-you-know-what, but manual removal really works best. Dig deep into the soil, starting at the edge of the problem area. Remember that periwinkle weed control relies upon complete removal of those roots, which may be several feet (1 m.) into the soil.

Make a 2 foot (61 cm.) trench around the area and loosen the first section of roots. Pull as you dig further into the bed, loosening the soil as you go. The next season, if you see any small plants forming, immediately dig them out.

In this way you will be rid of the groundcover permanently in a couple of years and other plants can take over the area. It won’t be easy, but it is a non-toxic removal that is effective.