Trimming Boxwood Bushes – How And When To Prune Boxwoods 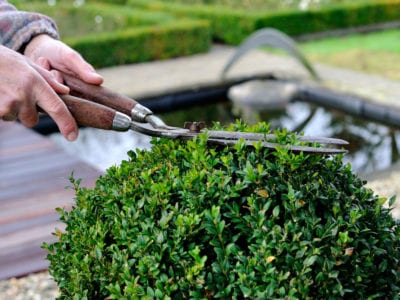 Introduced to America in 1652, boxwood shrubs have been gracing gardens since colonial times. Members of the genus Buxus include about thirty species and 160 cultivars, including Buxus sempervirens, the common American boxwood. The varieties are largely based on leaf size and growth which can range from one foot tall to twenty (.5-6 m.).

Boxwoods have fallen out of favor with some gardeners in recent years. They are the gardeners that remember trimming boxwood bushes into severe and often geometric shapes that have no place in the more casual gardens of today. They also remember how much time and effort it took to keep them in formal rigidity.

And that, my friends, is a shame.

Boxwood bushes have an undeserved reputation and should be a welcome addition to the modern landscape. When the right cultivar is chosen, they need very little pruning. Boxwood is easy to grow and thrives under many conditions that would defeat a less sturdy plant. Their compact evergreen leaves add texture and form to the garden when all else falls to winter’s sleep. Used as a hedge, nothing provides a better screen against an unsightly view.

That said, these handy evergreens do need occasional pruning. Boxwood, like most shrubs, needs a cleaning out of dead or twisted branches that can be harmful to the bush. Even when chosen for a particular size or shape, an errant branch or twig may need trimming. Boxwood bushes simply don’t need much care when compared to other landscape shrubs.

How and When to Prune Boxwoods

As with all shrubs, you should be asking when the best time to trim boxwoods might be and when should you prune. Boxwoods can be trimmed at any time of year, but, for plant health, it’s best to avoid shearing in the late fall. The new growth that appears after trimming boxwood bushes may not have time to harden off before frost.

Shearing or trimming may be done with hand shears or with electric hedge clippers. It is the removal of all or most of the most recent growth. Plant age should be taken into account when deciding when to prune boxwoods. Young plants actually benefit from frequent shearing. The best time to trim boxwoods to shape is during the first few years. This will encourage branching and new growth, which will result in denser growth and defined shape. But, don’t overdo it.

Excessive shearing can produce growth so dense on the outside of your shrub that it will prevent light from reaching the center of the bush and leave the inner branches bare.

Removal of larger branches or pruning boxwoods is used to remove diseased or dying branches or to refurbish plants that are past their prime. Beware! Severely pruning boxwoods can kill the shrub. It’s best to take such drastic measures in stages, over several years if necessary, to give your boxwood shrubs the best opportunity to survive.

One last note: if you don’t mind a little extra work, boxwood shrubs make excellent topiaries. Topiaries are living garden statuary and can be molded into any shape your imagination can envision. They can range from one to two feet (.5 m.) high to ten feet (3 m.) high. Depending on the size and shape of your frame, you may need more than one plant to fill the form.

The best time to trim boxwoods used in topiaries is in the spring before new growth begins. Train smaller branches to conform to the structure and prune larger branches to prevent them from growing toward the outside of the form. As the seasons pass, your boxwood shrubs will take on the shape of the structure and you will have a unique conversation piece and interesting focal point for your garden.