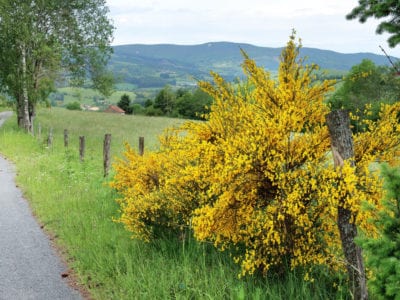 Broom plants, such as Scotch broom (Cytisus scoparius), are common sights along highways, in meadows and in disturbed areas. Most broom shrub varieties were originally introduced as ornamentals but some species became useful as erosion control. Broom shrub plants may get 9 feet (2.5 m.) tall and produce some spectacular bloom displays in spring.

The plant can get a bit invasive in some areas though, but a little information on broom shrubs will help you control the plants while still enjoying their ease of care and brilliant blooms.

Brooms form small to large shrubs that grow very quickly. The plants have become quite invasive with seeds spreading and sprouting quickly. This speedy development makes the plants a threat to native species. Brooms produce wide branching root systems and thick tenacious stems. The stems die back in dry weather and produce flammable “torches” of plant material. There are several broom shrub varieties but the most common are the Scotch and Spanish, which were introduced as erosion control.

Brooms can get 3 to 10 feet (92 cm. – 3 m.) tall with angled stems and small simple to trifoliate leaves. Stem shape separates the broom shrub varieties. Scotch broom has a five-sided stem while French and Portuguese have 8 and 10 angled stems. Spanish broom is so closely angled that it appears almost round. The bright yellow flowers have a pea-pod like appearance which yield to black or brown pods filled with dark green seeds in late summer.

Where Do Broom Shrubs Grow?

Rather than ask, where do broom shrubs grow, you should ask, where don’t they grow. The only space that is not pleasing to broom shrubs is a soggy, boggy and shady location. They establish quickly in disturbed areas, but also in grassland and forests. Their adaptability and rapid growth can lead to an invasive tendency in some areas.

Controlling broom shrubs with mechanical pulling and cultural management can help in areas with low infestations. This can be difficult on plants like Scotch broom, which may have a 6-foot (1.8 m.) long taproot. Chop out the plant in spring when the soil is moist and has some give. You can also cut the green foliage and let the stems dry out. Then follow with controlled burning to prevent the plant from re-sprouting.

Instead of burning, you can paint stumps with a systemic herbicide. You can also apply a foliar spray, which will translocate through the stoma in the leaves, down into the vascular and root system of the plant. The best time to spray is between April to July when leaves are dry and temperatures are 60 to 80 degrees Fahrenheit (15 to 26 C.).