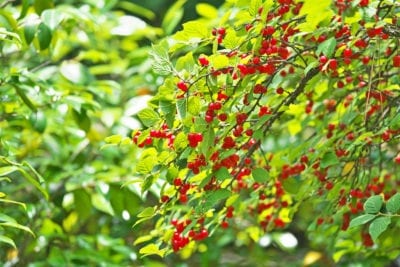 Growing your own fruit is the pinnacle of many gardeners’ dreams. Once established, fruit trees supply a reliable harvest each year. Other than routine maintenance of the trees, the only real labor is the picking. What if you could grow cherries without the hassle of climbing a ladder to pick them? If that sounds intriguing, you may want to consider growing bush cherries.

What is a Nanking Cherry?

Nanking cherry (Prunus tomentosa) is a central Asian species of bush cherry tree native to China, Japan, and the Himalayas. They were introduced into the U.S. in 1882 and are winter hardy in USDA zones 3 to 6.

The Nanking cherry is a fast-growing species that sets fruit within two years. Without pruning, a Nanking bush cherry tree can reach heights of 15 feet (4.5 m.), but the spreading growth habits of the Nanking cherry allow it to grow as a shrub or planted closely and trimmed into a hedge. It’s an early spring bloomer producing attractive pink buds that turn white as they flower.

The bush cherry tree produces dark red fruit about ½ inch (1 cm.) in diameter. The tart-tasting cherries are edible and ripen in July and August in the Northern Hemisphere (January and February in the Southern Hemisphere).

For home use, Nanking cherries are high-yielding and stay fresh on the tree for two to three weeks after ripening. It’s advisable to net the cherries, as the fruit is attractive to native songbirds. Routine pruning to control the height of the Nanking bush cherry tree will make picking the cherries easier. When growing bush cherries at home, two or more trees are needed for cross pollination.

Harvested fruit can be eaten fresh or preserved for later consumption. Due to their smaller size, pitting can be a bit more time consuming than with other types of cherries.

Plant Nanking cherry trees in a sunny location. They prefer a loamy soil, but can be grown in many soil types as long as drainage is adequate. Bush cherries are tolerant of windy conditions and can be planted as a windbreak.

Once established, growing bush cherries doesn’t require much maintenance. They tend to be short lived, but last 50 years or more with proper care. Few insects or diseases have been reported.

Nanking cherries don’t self-propagate to the point of being invasive. Additionally, the species is fairly drought resistant, often surviving in areas with a minimum of 12 inches (31 cm.) of precipitation yearly.