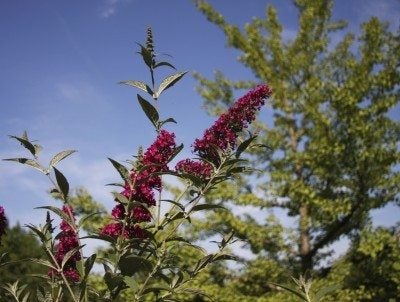 Is Butterfly Bush an Invasive Species?

There are pros and cons to growing butterfly bushes in the landscape.

An invasive species is usually an exotic plant introduced from another country as an ornamental. Invasive plants spread quickly in nature, invading wild regions and taking over growing space from native plants. Usually, these are easy-maintenance plants that spread rapidly by generous seed production, suckering, or cuttings that root readily.

The butterfly bush is such a plant, introduced from Asia for its beautiful flowers. Do butterfly bushes spread? Yes, they do. The wild species Buddleia davidii spreads rapidly, invading riverbanks, reforested areas, and open fields. It forms thick, shrubby thickets that preclude the development of other native species such as willow.

Butterfly bush is considered invasive in many states, as well as England and New Zealand. Some states, like Oregon, have even banned sales of the plant.

Butterfly bush control is very difficult. Although some gardeners argue that the shrub should be planted for the butterflies, anyone who has seen clogged rivers and overgrown fields of Buddleia realizes that controlling invasive butterfly bushes must be a top priority.

Scientists and conservationists say that one potential way to begin controlling invasive butterfly bushes in your garden is to deadhead the flowers, one by one, before they release seeds. However, since these shrubs produce many, many blooms, this might prove a full-time job for a gardener.

Growers are coming to our rescue, however. They have developed sterile butterfly bushes that are currently available in commerce. Even the state of Oregon has amended its ban to allow the sterile, non-invasive species to be sold. Look for the trademarked series Buddleia Lo & Behold and Buddleia Flutterby Grande.

Printer Friendly Version
Read more about Butterfly Bush
<PreviousNext>
Did you find this helpful? Share it with your friends!
FacebookTweetPinEmail
Related Articles
Newest Articles
You might also like…
Additional Help & Information