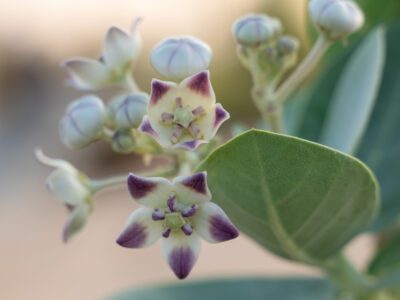 Calotropis is a shrub or tree with lavender flowers and cork-like bark. The wood yields a fibrous substance that is used for rope, fishing line, and thread. It also has tannins, latex, rubber, and a dye that is used in industrial practices. The shrub is considered a weed in its native India but has also been used traditionally as a medicinal plant. It has numerous colorful names such as Sodom Apple, Akund Crown flower, and Dead Sea Fruit, but the scientific name is Calotropis procera.

Calotropis procera is a woody perennial that carries white or lavender flowers. The branches are twisting and cork-like in texture. The plant has ash-colored bark covered with white fuzz. The plant has silver-green large leaves that grow opposite on the stems. The flowers grow at the tops of apical stems and produce fruits.

The fruit of Calotropis procera is oval and curved at the ends of the pods. The fruit is also thick and, when opened, it is the source of thick fibers that have been made into rope and used in a multitude of ways.

Ayurvedic medicine is a traditional Indian practice of healing. The Indian Journal of Pharmacology has produced a study on the effectiveness of extracted latex from Calotropis upon fungal infections caused by Candida. These infections usually lead to morbidity and are common in India so the promise of properties in Calotropis procera is welcome news.

Mudar root bark is the common form of Calotropis procera that you will find in India. It is made by drying the root and then removing the cork bark. In India, the plant is also used to treat leprosy and elephantiasis. Mudar root is also used for diarrhea and dysentery.

Calotropis procera grows as a weed in many areas of India, but it is also purposefully planted. The plant’s root system has been shown to break up and cultivate cropland. It is a useful green manure and will be planted and plowed in before the “real” crop is sown.

Calotropis procera improves soil’s nutrients and improves moisture binding, an important property in some of the more arid croplands of India. The plant is tolerant of dry and salty conditions and can easily be established in over cultivated areas to help improve the soil conditions and reinvigorate the land.