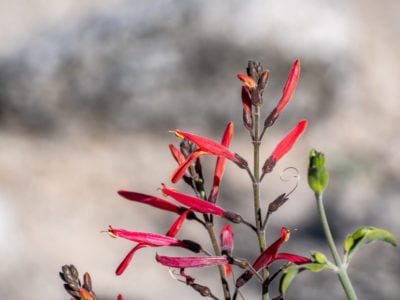 Also known as Belperone, chuparosa (Beloperone californica syn. Justicia californica) is a desert shrub native to the arid climates of the Western United States—primarily Arizona, New Mexico, Southern Colorado and California. With its open and airy growth habit, chuparosa is an ideal addition to an informal, low-maintenance desert landscape. Growth rate of the plant is moderate.

Chuparosa is the Spanish word for hummingbird. The descriptive name suits the plant well; flocks of hummingbirds are attracted to the tight clusters of bright red, tube-shaped blooms, which appear throughout the year depending on the temperature. In mild climates, expect blooms all winter.

The thin, arching branches are an attractive gray-green. Although chuparosa is an evergreen plant, it often drops its leaves during a winter dormant period. Chuparosa shrubs are large, twiggy plants that reach heights of 3 to 6 feet at maturity. Allow plenty of space for the shrub’s potential 4 to 12-foot sprawl.

Plant chuparosa in full sunlight because shade reduces blooming. This tough shrub even survives reflected sunlight and heat from a fence or wall.

Although chuparosa shrubs tolerate nearly any type of well-drained soil, they prefer sandy or rocky soil.

Chuparosa is a drought-tolerant plant that thrives with as little as 10 inches of moisture per year. Too much water may result in rapid growth, a leggy, overgrown plant and decreased blooming. A drought-stressed plant may drop its leaves in summer, but foliage returns quickly with irrigation.

Chuparosa plant care is minimal. As a general rule, one deep watering every month is sufficient. Always let the soil dry thoroughly between watering; chuparosa is a semi-succulent plant that will rot in soggy soil.

Chuparosa is nipped by freezing temperatures but the shrub will regrow from the roots in spring. To keep the shrub neat, remove winter-damaged growth and prune to restore the desired shape.

Chuparosa is easy to propagate by taking stem cuttings in late spring or early summer. Dip the ends of the cuttings in rooting hormone, then plant them in a container filled with a mixture of half sand and half potting mix. Place the container in moderate sunlight.

Plant the small shrubs outdoors when you see active new growth, which indicates the cuttings have rooted.