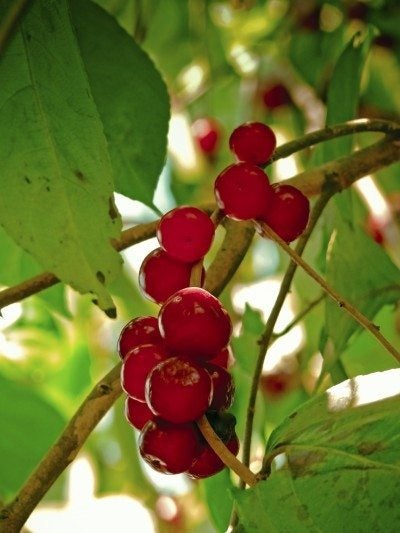 Winterberry holly (Ilex verticillata) is a slow-growing holly bush variety, native to North America. It usually grows in damp areas like swamps, thickets and along rivers and ponds. It gets its name from the Christmas-red berries that develop from fertilized flowers and stay on the bare bush stems much of the winter. For winterberry holly information, including notes on how to grow winterberry holly, read on.

Winterberry holly is a medium sized bush, growing no taller than 15 feet (4.5 m.). The bark is smooth and attractive, gray to black, while the crown is upright and spreading. The branches are slender and grow quite thick in a zigzag pattern.

When you read up on winterberry holly information, you learn that the shrubs are deciduous, with leaves up to 4 inches (10 cm.) long. The leaves are dark green in the summer, turning yellow in autumn, and falling off entirely by October.

Even if you are already growing winterberry holly, you’ll have to look closely to see the small, greenish flowers that appear in spring. But it’s easy to glimpse the many bright red berries that deck the winterberry holly bows from late summer deep into winter. Each berry holds three to five tiny seeds.

How to Grow Winterberry Holly

If you are growing winterberry holly or thinking of doing so, you’ll be happy to learn that the shrub is easy to grow. Winterberry care is also simple if you plant the bush in an appropriate area.

When you want to know how to grow winterberry holly, remember that the shrub should be planted in acidic, moist soil in an area with some sun. Although holly will grow in most soils, caring for winterberry holly shrubs is easiest when you plant them in organic loam.

Winterberry holly care does not require a male and a female plant, but you’ll need at least one of each in the vicinity if you want the signature red berries. Only fertilized female flowers will produce berries. One male winterberry plant produces adequate pollen for up to 10 female plants.

Pruning is not an essential part of caring for winterberry holly shrubs. However, if you have these spreading bushes in the backyard, you may wish to trim them into shape in spring before new growth appears.