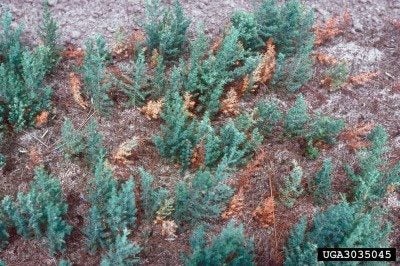 Twig blight is a fungal disease that most often occurs in early spring when leaf buds have just opened. It attacks the tender new shoots and terminal ends of plants. Phomopsis twig blight is one of the more common fungi that causes the disease in junipers. Juniper twig blight disease is a disfiguring plant problem, although annual persistent symptoms can cause severe damage to young plants.

Juniper twig blight can be caused by Phomopsis, Kabatina, or Scllerophoma pythiophila but the more commonly found is the Phomopsis fungus. Fungi thrive when there is adequate moisture and warm temperatures, which is why this juniper disease shows up in spring. It not only affects juniper but also arborvitae, white cedar, cypress, and false cypress.

Juniper twig blight is characterized by the die back of the terminal growth on an afflicted evergreen plant. The foliage will turn light green, reddish brown, or even dark gray and the dead tissue will gradually creep into the central foliage of the plant. The fungi will eventually produce tiny black fruiting bodies that appear three to four weeks after infection. The new tissue is the most often infected with juniper twig blight and symptoms show up approximately two weeks later.

Fungus reproduces from spores, which can be born on wind or cling to animals and clothes but are more often moved via water. During the wet spring the fungus is most active and can be spread by splashing water, droplets carried in the air, and introduced into damaged or cut wood. Phomopsis can attack the juniper in spring, summer, and in fall. Any material that contracts the fungus in fall will show symptoms in spring.

Phomopsis, the most common form of juniper twig blight, can progress to girdle young branches and prevent water and nutrients from reaching the ends of the growth. It may move into main branches and cause cankers which are the open areas of tissue in woody plant material. This form of juniper twig blight will produce fruiting bodies called pycnidia that can be found at the base of dead foliage.

Good twig blight control starts with good clean up practices. Sterilization of cutting implements will also help prevent the spread of the fungus. Fungi is spread via spores which can adhere to equipment or overwinter in dropped foliage and plant material. Rake up any debris under your juniper and prune out diseased foliage tips. Sterilize the cutting implement between cuts with a ten percent bleach and water solution. Cut out infected material when the twigs are dry to minimize the spread of the fungal spores.

Chemicals for the control of juniper twig blight disease must be applied before symptoms are noticed to be useful. Most common fungicides offer limited control if they are not paired with good mechanical management and prevention. Fungicide applications will have to be done throughout the season since Phomopsis can occur at any time during the growing period. Benomyl or fixed copper have shown to be useful if applied regularly and consistently.

Printer Friendly Version
Read more about Junipers
Next>
Did you find this helpful? Share it with your friends!
FacebookTweetPinEmail
Related Articles
Newest Articles
You might also like…
Additional Help & Information