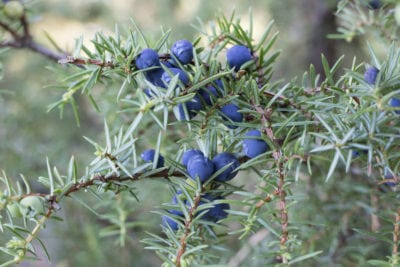 The Pacific Northwest is rife with junipers, small green evergreen shrubs that are often covered in berries that look akin to blueberries. Given that they are prolific and the fruit looks so much like a berry, the natural question is “can you eat juniper berries?” If so, what do you do with juniper berries? Read on to find out how to use juniper berries along with some useful juniper berry recipes.

Can You Eat Juniper Berries?

Yes, juniper berries are edible. In fact, you may have tasted them before without even knowing it if you drink alcoholic beverages. Juniper berries are what gives a gin martini its unique flavoring. While gin has been a popular intoxicant for over 300 years in western culture, juniper berries have actually been used medicinally since the 16th century.

How to Use Juniper Berries

Common juniper, Juniperus comunis, belongs to the family Cupressaceae that encompasses around 60 to 70 species of aromatic evergreens throughout the Northern Hemisphere. It is the most widely distributed conifer in the world and the most common in the northern temperate region.

Male and female reproductive organs are found on separate plants, thus, only females have fruit. These berries mature in one to three seasons and contain one to twelve seeds, although the norm is around just three.

In the past, juniper berry uses were primarily medicinal. They were used to treat numerous diseases by the ancient Greeks as well as the Arabs and Native American Indians. The berries were used either chewed raw or steeped into a tea to treat gastrointestinal complaints, rheumatic pain, and for back and chest ailments.

Rich in volatile oils, junipers have been used as herbs in aromatherapy, a science that can be traced back over 5,000 years. This science uses essential oils in massage, bathing, or in teas to promote not only good health but therapeutic beauty.

What to Do with Juniper Berries

Dr. Sylvuis invented gin in the Netherlands in 1650, although it wasn’t originally created as a spirit but rather as a remedy for kidney ailments. The concoction was a success, although less for its renal remedies and more for its alcoholic content. If you are looking for something to do with juniper berries, I suppose you could always follow in Dr. Sylvuis’s footsteps and make your own gin, or bathtub gin, but there are plenty of other ways to impart that unique juniper flavor into foods.

Juniper berry recipes abound and can add an interesting flavor profile to homemade sauerkraut or made into a tincture to add a floral, pine-like essence to alcoholic or non-alcoholic drinks. It has primarily been used to season heavily flavored game, like pheasant or venison. It works beautifully in mulled wines and enhances jams, such as rhubarb and juniper berry jam.

Try adding juniper berries to your next batch of roasted potatoes. Preheat the oven to 350 degrees F. (177 C.). Place olive oil and juniper berries into a baking pan and put in the preheated oven for a few minutes to warm the berries and get them to release their essential oils. Remove the baking pan from the oven and toss baby potatoes (use red, yellow, purple, or all three) into the infused olive oil along with some fresh smashed garlic cloves.

Roast the potatoes for 45 to 50 minutes or so until they are tender. Remove them from the oven and toss them with sea salt, freshly ground pepper, and a squeeze of fresh lemon juice.

Printer Friendly Version
Read more about Junipers
<PreviousNext>
Did you find this helpful? Share it with your friends!
FacebookTweetPinEmail
Related Articles
Newest Articles
You might also like…
Additional Help & Information