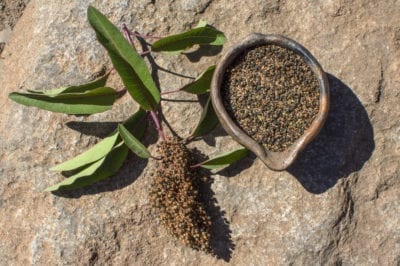 An easy-care shrub in its native growing area, laurel sumac is a great choice for those looking for an attractive plant that’s both carefree and tolerant of wildlife. Let’s learn more about this fascinating bush.

What is Laurel Sumac?

Native to North America, laurel sumac (Malosma laurina) is an evergreen shrub found in the coastal sage and chaparral along the coasts of Southern California and the Baja California Peninsula. The plant was named for its resemblance to bay laurel, but the two trees are unrelated.

Like many plants, laurel sumac was put to good use by Native Americans, who dried the berries and ground them into flour. A tea made from the bark was used to treat dysentery and certain other conditions.

According to California history, early orange growers planted trees where laurel sumac grew because the presence of laurel sumac guaranteed the young citrus trees wouldn’t be nipped by frost.

Today, laurel sumac is used mostly as a landscape plant in chaparral gardens. This drought-tolerant shrub is attractive to birds, wildlife, and beneficial insects. It generally isn’t damaged by deer or rabbits either.

How to Grow a Laurel Sumac

Growing laurel sumac is easy in the mild climates of USDA plant hardiness zones 9 and 10. This plant is not frost-tolerant. Here is some basic growing information for laurel sumac care:

Nearly any soil works well for growing laurel sumac, including clay or sand. Laurel sumac is happy in partial shade or full sunlight.

Water laurel sumac regularly throughout the first growing season. Thereafter, supplemental irrigation is needed only when summers are particularly hot and dry.