Japanese Plum Yew Info – How To Grow A Plum Yew 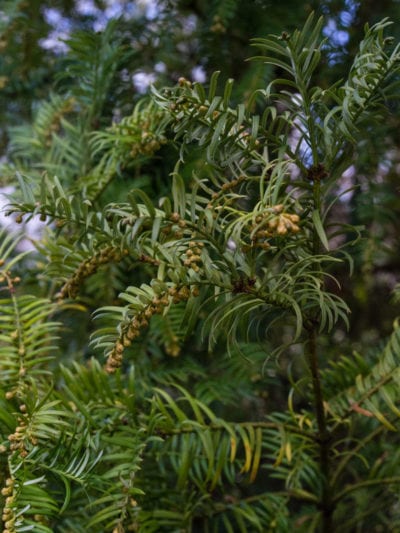 Like boxwoods, plum yew plants make excellent, slow-growing, formal clipped hedges or borders. Also, like boxwoods, the shrubs can be kept trimmed to a low height of a foot (30.5 cm.) if desired.

Plum yew plants (Cephalotaxus harringtonia) are dioecious, coniferous evergreens that when grown as a shrub reach a height of about 5 to 10 feet (2-3 m.) or when grown as a tree 20 to 30 feet (6-9 m.) in height.

They have linear, spirally patterned yew-like soft needles that are set in a V pattern on erect stems. Edible, plum-like fruits are produced on female plants when a male plant is nearby.

How to Grow a Plum Yew

Japanese plum yew plants are native to shaded wooded areas of Japan, northeast China, and Korea. Slow growers, the trees grow about a foot (30.5 cm.) per year. Well-maintained plum yew plants can live from 50 to 150 years.

Plum yew plants are tolerant of both shade and hot temperatures which makes them an excellent substitute for true yews in the southeastern United States.

Plum yew plants enjoy both sun and shade, moist, highly acidic to neutral sandy or loam soil. They are hardy in USDA zones 6 through 9, sunset zones 4 through 9, and 14 through 17. It prefers shaded environments in warmer latitudes and sun exposure where summers are cool.

Propagation can be made via softwood cuttings in the spring. Plants should be spaced 36 to 60 inches (1-2 m.) apart.

Plum yew plants have few pest or disease problems with the exception of soil nematodes and mushroom root rot. Once established, plum yews require little care and are quite drought-tolerant.