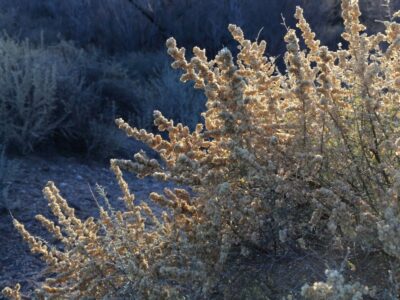 Four-winged – or fourwing – saltbush is a truly unique plant native to much of the western U.S. It has showy fruits and tolerates dry, tough conditions. Use it for fall visual interest, wildlife habitat and food, for erosion control, and in native plantings.

What is Four-Winged Saltbush?

Atriplex canescens is also known as chamiza, bushy atriplex, and fourwing shadscale. Native to the western U.S. and parts of Canada and Mexico, it is a dense shrub that can grow low, or more like a tree. It grows up to eight feet (2.4 m.) tall and wide.

Four-winged salt bush has very deep roots, which makes it useful for erosion control. It has grayish-green leaves and unremarkable flowers. The fruits, however, are showy. One-half to an inch (1.3 to 2.5 cm.) across, the fruits grow in clusters, each with four membranous wings.

The fruit of the four-winged saltbush is the most visually unique of its characteristics. What makes this plant truly special, though, is its reproduction. Most specimens are dioecious, meaning they have either male or female reproductive organs.

The sex of each plant is not fixed. Depending on the environment, a single plant can change from male to female. Scientists have found that up to 20% of plants in a population switch sex each year. The female plants are more likely to do so, and they tend to change after a colder winter or a drought.

If you love wildlife and are in its native range, consider planting four-winged saltbush. Animals that use it for food or shelter, or both, include deer, quail, jack rabbit, ground squirrel, and porcupine. It also attracts bees and butterflies. For most livestock, four-winged saltbush is a nutritious forage plant. This includes sheep, goats, and cattle. Native Americans ate the seeds.

In its native range, this plant is easy to grow. It tolerates drought and poor, salty soil, and needs no watering once established. Avoid growing where water collects, as it will begin to grow vigorously and become invasive.

If growing four-winged saltbush from seed or small cuttings, protect the shrub for the first three to four years. Wildlife may destroy it before it grows to full size. They particularly like the seeds, so this can slow natural propagation.