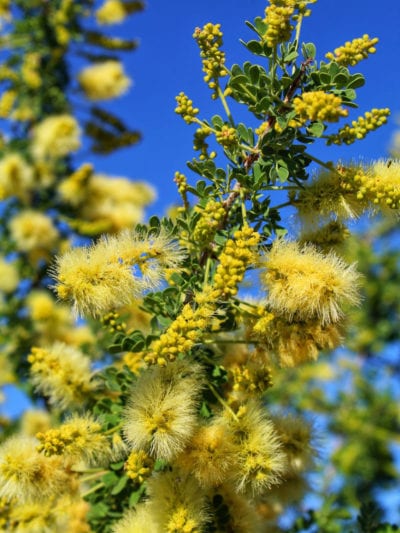 What is a catclaw acacia? It is also known as wait-a-minute bush, catclaw mesquite, Texas catclaw, devil’s claw, and Gregg catclaw to name a few. Catclaw acacia is a small tree or large shrub native to northern Mexico and the southwestern United States. It grows primarily along streambanks and washes, and in chaparral.

Catclaw acacia (Acacia greggii) is named for Josiah Gregg of Tennessee. Gregg, who was born in 1806, traveled through much of the Southwest studying trees and geology and eventually gathered his notes into two books. In later years, he was a member of a biological expedition to California and western Mexico.

Catclaw acacia tree consists of formidable thickets of plants armed with sharp, hooked thorns that can tear your clothing – and your skin. At maturity the tree reaches heights of 5 to 12 feet (1-4 m.), and sometimes more. In spite of their troublesome nature, catclaw also produces spikes of fragrant, creamy white flowers from spring through fall.

The flowers are rich in nectar, making this tree one of the desert’s most important plants for honeybees and butterflies.

Water the tree regularly during the first growing season. Thereafter, once or twice a month is plenty for this tough desert tree. Prune as needed to remove unsightly growth and dead or damaged branches.

Catclaw is highly valued for its attraction to honeybees, but the plant was also important to tribes of the Southwest who used it for fuel, fiber, fodder, and building material. Uses were varied and included everything from bows to brush fences, brooms, and cradle frames.

The pods were eaten fresh or ground into flour. The seeds were roasted and ground for use in cakes and breads. The women made sturdy baskets from the twigs and thorns, and sachets from the fragrant flowers and buds.

Printer Friendly Version
Read more about Acacia
<Previous
Did you find this helpful? Share it with your friends!
FacebookTweetPinEmail
Related Articles
Newest Articles
You might also like…
Additional Help & Information