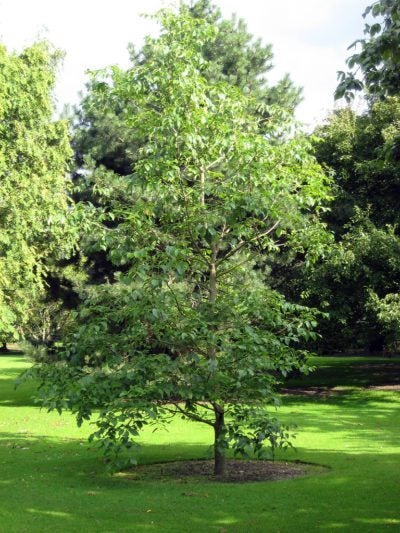 You’ve heard of pumpkins, but what is a pumpkin ash? It’s a fairly rare native tree that is a relative of the white ash tree. Pumpkin ash care is difficult because of the impact of one particular insect pest. Are you thinking of growing pumpkin ash trees? Read on for more pumpkin ash information, as this may not be such a great idea.

What is a Pumpkin Ash?

So exactly what is a pumpkin ash? Pumpkin ash (Fraxinus profunda) is a large tree native to southern swamps and other wet habitats. You can see the species along river and stream banks in the Coastal Plain. It often grows with bald cypress and similar trees.

While this tree is very similar to white ash (Fraxinus americana), pumpkin ash information suggests that the trees differ in more than one aspect. Pumpkin ash grows in much wetter areas, and the undersides of the leaves are not white.

Pumpkin ash trees can grow to 90 feet (27.5 m.) tall in nature. However, they are often smaller than this. Most pumpkin ash trees grow wild and the tree isn’t frequently cultivated.

If you read up on pumpkin ash information, you’ll be better able to identify the tree. The leaves of pumpkin ash are compound, with seven to nine leaflets. The tops of the leaves are dark green while the undersides are lighter. The tree’s flowers appear in spring. They are greenish purple. Over time, they fade and the tree grows its fruit, a flattened samara.

Another unusual aspect of the tree is its trunk. The bark is a gray-brown with interlacing ridges, and the base of the truck swells when grown in swamps or other wet habitats. It is from this enlarged base that the tree’s name of “pumpkin” ash is derived, as this is oftentimes pumpkin-shaped.

If you are wondering how to grow a pumpkin ash, you’ll definitely need a uniquely wet habitat like a swamp or river bank. In fact, few gardeners are growing pumpkin ash trees as ornamentals.

Although culture of pumpkin ash is not difficult, pumpkin ash care is complicated by the tree’s susceptibility to the emerald ash borer. This pest can potentially kill off most or all of the pumpkin ash in some locations.

In Michigan, experts are not sure that sustainable colonies of trees still exist. In fact, they suggest that, if they do exist, it would be worth collecting seeds in order to preserve the species.

Printer Friendly Version
Read more about Ash Trees
<PreviousNext>
Did you find this helpful? Share it with your friends!
FacebookTweetPinEmail
Related Articles
Newest Articles
You might also like…
Additional Help & Information