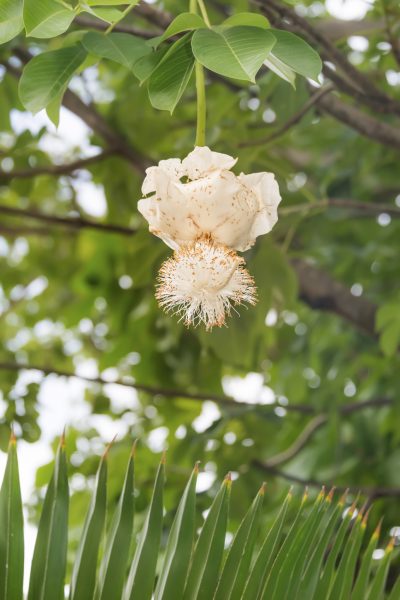 The large, white flowers of the baobab tree dangle from the branches on long stems. Huge, crinkled petals and a big cluster of stamen give baobab tree flowers an exotic, powder puff appearance. Find out more about baobabs and their unusual flowers in this article.

Native to the African Savannah, baobabs are best suited to warm climates. The trees are also grown in Australia and sometimes in large, open estates and parks in Florida and parts of the Caribbean.

The tree’s overall appearance is unusual. The trunk, which can be 30 feet (9 m.) in diameter, contains a soft wood that is often attacked by a fungus and hollows out. Once hollow, the tree can be used as a meeting place or dwelling. The interior of the tree has even been used as a jail in Australia. Baobabs can live for thousands of years.

The branches are short, thick, and twisted. African folklore holds that the unusual branch structure is the result of the tree’s constant complaining that it didn’t have many of the attractive features of other trees. The devil yanked the tree out of the ground and shoved it back in top first with its tangled roots exposed.

Additionally, its strange and eerie appearance made the tree ideal for its starring role as the Tree of Life in the Disney film, The Lion King. Baobab flower blooming is another story altogether.

You can think of an African baobab tree (Adansonia digitata) as a self-indulgent plant, with flowering patterns that suit itself, but not the desires of people. For one thing, baobab flowers are stinky. This, combined with their tendency to open only at night, make baobab flowers difficult for humans to enjoy.

On the other hand, bats find baobab flower blooming cycles a perfect match for their lifestyle. These night-feeding mammals are attracted by the malodorous fragrance, and use this feature to find the African baobab trees so they can feed on the nectar produced by the flowers. In exchange for this nutritious treat, the bats serve the trees by pollinating the flowers.

The flowers of the baobab tree are followed by large, gourd-like fruit that is covered with gray fur. The fruit’s appearance is said to resemble dead rats hanging by their tails. This has given rise to the nickname “dead rat tree.”

The tree is also known as the “tree of life” for its nutritional benefits. People, as well as many animals, enjoy the starchy pulp, which tastes like gingerbread.