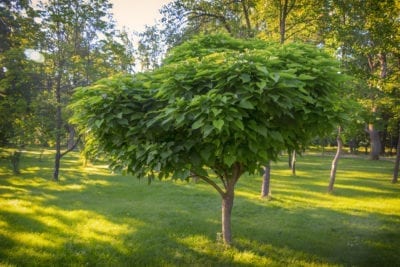 People either love catalpa trees or they hate them. These trees are tough and adaptable, so much so that they have been labeled “weed trees.” It doesn’t help that the tree is messy, dropping its large leaves, flower petals, and cigar-shaped seed pods as they fade.

Still, the catalpa is a resilient, drought tolerant, and attractive tree used by indigenous people for medicinal purposes. It grows fast, putting down an extensive root system, and can be used to stabilize soil that may be subject to landslides or erosion.

Hardy catalpa is found in the wild in the northeastern and southwest regions of the United States. It grows quite large, to 70 feet (21 m.) tall in the wild, with an open spread of some 40 feet (12 m.). Southern catalpa grows in Florida, Louisiana, and other southeastern states. This is the smaller of the two common varieties of catalpa trees. Both have white blossoms and interesting seed pods.

While these native trees are the types of catalpa most often seen in residential landscapes in the country, those seeking a tree can also choose among other catalpa tree varieties.

One of the other types of catalpa is Chinese catalpa (Catalpa ovata), native to Asia. It offers very ornamental cream-colored flowers in spring, followed by the classic bean-like seed pods. This is among the more tolerant types of catalpa, accepting a range of soil conditions, from wet to dry. It does require full sun but is hardy to U.S. Department of Agriculture plant hardiness zone 4.

Other species native to China include the Cataola Farges catalpa (Catalpa fargesii). It has pretty, unusual speckled flowers.

You will find some catalpa cultivars and hybrids available. Catalpa cultivars of the southern variety include ‘Aurea,’ which offers bright yellow leaves that turn green when it gets hot. Or pick a rounded dwarf, ‘Nana.’

Catalpa x erubescens is the classification for hybrids between Chinese and southern catalpa. One to look for is ‘Purpurescens,’ with spring leaves of rich burgundy. They also fade to green with the summer heat.