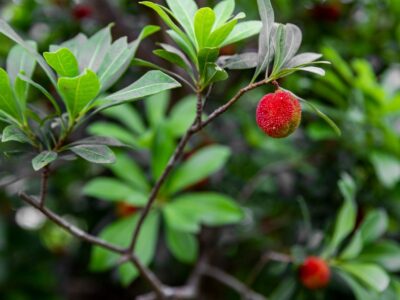 What is Yangmei Fruit?

Yangmei fruit trees are evergreens that produce purplish round fruit that looks somewhat like a berry, hence their alternate name of Chinese strawberry. The fruit is actually not a berry, however, but a drupe like cherries. That means that there is a single stone seed in the center of the fruit surrounded by juicy pulp.

The fruit is sweet/tart and high in antioxidants, vitamins, and minerals. The fruit is often used to make healthy juices as well as being canned, dried, pickled, and even made into an alcoholic wine-like beverage.

More often marketed as “Yumberry,” production has increased rapidly in China and is now also being imported into the United States.

Chinese bayberry is of significant economic value south of the Yangtze River in China. In Japan, it is the prefectural flower of Kochi and the prefectural tree of Tokushima where it is commonly referenced in ancient Japanese poems.

The tree has been of medicinal use for over 2,000 years for its digestive qualities. The bark is used as an astringent and to treat arsenic poisoning as well as skin disorders, wounds, and ulcers. Seeds are used to treat cholera, heart problems, and stomach issues like ulcers.

Modern medicine is looking at the high levels of antioxidants in the fruit. They are believed to sweep free radicals completely from the body. They also protect the brain and nervous system and are purported to prevent cataracts, skin aging, and to relieve arthritis. The fruit juice has also been used to reduce blood pressure and to restore the malleability of blood vessels as well as to treat diabetes.

It is a small to medium sized tree with smooth gray bark and a rounded habit. The tree is dioecious, meaning male and female flowers bloom on individual trees. When immature, the fruit is green and matures into a dark red to purple-red color.

If you’re interested in growing your own Chinese bayberry plants, they are hardy to USDA zone 10 and thrive in sub-tropical, coastal regions. Yangmei do best in sun to partial shade. They have a shallow root system that does best in sandy, loamy, or clay soil with excellent drainage and that is either slightly acidic or neutral.