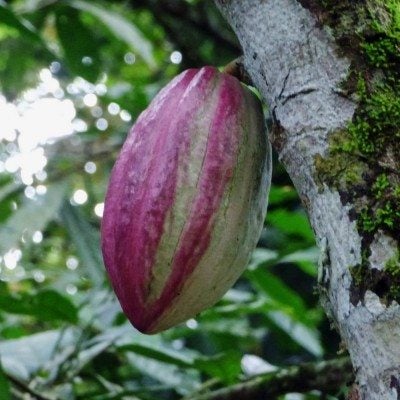 Image by Gardening Know How, via Heather Rhoades

In my world, chocolate will make everything better. A spat with my significant other, an unexpected repair bill, a bad hair day – you name it, chocolate soothes me in a way that nothing else can. Many of us not only love our chocolate but even crave it. So, it comes as no surprise that some people would like to grow their own cacao tree. The question is how to grow cocoa beans from cocoa tree seeds? Keep reading to find out about growing cacao trees and other cocoa tree info.

Cocoa beans come from cacao trees, which reside in the genus Theobroma and originated millions of years ago in South America, east of the Andes. There are 22 species of Theobroma amongst which T. cacao is the most common. Archaeological evidence suggests that the Mayan people drank cacao as early as 400 B.C. The Aztecs prized the bean as well.

Christopher Columbus was the first foreigner to drink chocolate when he sailed to Nicaragua in 1502 but it wasn’t until Hernan Cortes, the leader of a 1519 expedition to the Aztec empire, that chocolate made its way back to Spain. Aztec xocoatl (chocolate drink) was not initially received favorably until the addition of sugar sometime later whereupon the drink became popular in the Spanish courts.

The popularity of the new drink incited attempts to grow cacao in the Spanish territories of the Dominican Republic, Trinidad, and Haiti with little success. Some measure of success was eventually found in Ecuador in 1635 when Spanish Capuchin friars managed to cultivate cacao.

By the seventeenth century, all of Europe was mad about cocoa and rushed to lay claim to lands suited to cacao production. As more and more cacao plantations came into being, the cost of the bean became more affordable and, thus, there was an increased demand. The Dutch and Swiss began establishing cocoa plantations established in Africa during this time.

Today, cocoa is produced in countries between 10 degrees north and 10 degrees south of the Equator. The largest producers are Cote-d’voire, Ghana, and Indonesia.

Cacao trees can live for up to 100 years but are considered productive for only around 60. When the tree grows naturally from cocoa tree seeds, it has a long, deep taproot. For commercial cultivation, vegetative reproduction via cuttings is more commonly utilized and results in a tree lacking a taproot.

In the wild, the tree may reach over 50 feet (15 m.) in height but they are generally pruned to half that under cultivation. The leaves emerge a reddish hue and turn to glossy green as they grow up to two feet (0.5 m.) long. Small pink or white flowers cluster on the tree’s trunk or lower branches during the spring and summer. Once pollinated, the flowers become ridged pods up to 14 inches (35.5 cm.) long, filled with beans.

How to Grow Cocoa Beans

Cacao trees are quite finicky. They need protection from the sun and wind, which is why they thrive in the understory of warm rainforests. Growing cacao trees requires mimicking these conditions. In the United States, that means the tree can only be grown in USDA zones 11-13 – Hawaii, parts of southern Florida, and southern California as well as tropical Puerto Rico. If you don’t live in these tropical climes, it may be grown under warm and humid conditions in a greenhouse but may require more vigilant cocoa tree care.

To start a tree, you will need seeds that are still in the pod or have been kept moist since their removal from the pod. If they dry out, they lose their viability. It isn’t unusual for the seeds to begin sprouting from the pod. If your seeds have no roots yet, place them between damp paper towels in a warm (80 degrees F. plus or over 26 C.) area until they begin to root.

Pot the rooted beans in individual 4-inch (10 cm.) pots filled with damp seed starter soil. Place the seed vertically with the root end down and cover it with soil just to the top of the seed. Cover the pots with plastic wrap and place them on a germination mat to maintain their temperature in the 80s (27 C.).

In 5-10 days, the seed should sprout. At this point, remove the wrap and put the seedlings on a partially shaded windowsill or under the end of a grow light.

As the seedling grows, transplant into successively larger pots, keep the plant damp and at temps between 65-85 degrees F. (18-29 C.) – warmer is better. Fertilize every two weeks from spring through fall with fish emulsion like 2-4-1; mix 1 tablespoon (15 mL.) per gallon (4 L.) of water.

If you live in a tropical region, transplant your tree when it is two feet (61 cm.) tall. Choose a humus-rich, well-draining area with a pH near 6.5. Situate the cacao 10 feet or so (3 m.) from a taller evergreen that can provide partial shade and wind protection.

Dig a hole three times the depth and width of the tree’s root ball. Return two-thirds of the loose soil back into the hole and set the tree atop the mound at the same level it grew in its pot. Fill in the soil around the tree and water it well. Cover the surrounding ground with a 2- to 6-inch (5 to 15 cm.) layer of mulch, but keep it at least eight inches (20.5 cm.) away from the trunk.

The tree should flower when 3-4 years old and about five feet (1.5 m.) tall. Hand-pollinate the flower in the early morning. Don’t panic if some of the resulting pods drop. It is natural for some pods to shrivel, leaving no more than two on each cushion.

When the beans are ripe and ready for harvest, your work isn’t done yet. They require extensive fermenting, roasting, and grinding before you, too, can make a cup of cocoa from your own cacao beans.