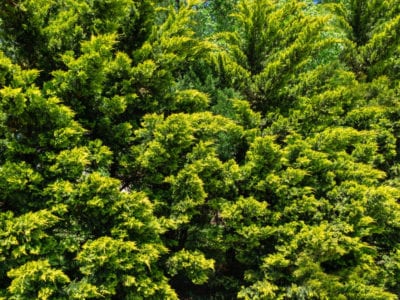 ‘Murray’ cypress (X Cupressocyparis leylandii ‘Murray’) is an evergreen, fast growing shrub for large yards. A cultivar of the overplanted Leyland cypress, ‘Murray’ has shown to be more disease and insect resistant, moisture tolerant, and adaptable to many soil types. It also develops a better branch structure that makes ‘Murray’ a good selection for areas with high winds.

‘Murray’ is becoming the top choice for screening out noise, unsightly views, or nosy neighbors. It can increase in height by 3 to 4 feet (1 to a little over 1 m.) per year, making it highly desirable as a quick hedge. When mature, ‘Murray’ cypress trees reach 30 to 40 feet (9-12 m.) with widths ranging from 6 to 10 feet (2 to a little over 2 m.). Hardy in USDA zones 6 through 10, its tolerance to heat and humidity makes growing ‘Murray’ cypress popular in the southeastern United States.

‘Murray’ cypress can be planted in full to part sun in any soil type and will thrive. It also is tolerant of slightly wet sites and suitable as a coastal tree.

Prune out dead or diseased wood anytime during the year. In late winter or early spring, lightly prune wayward stems to keep the tree in its characteristic Christmas tree shape. They also can be pruned later in the year up to mid-summer. If rejuvenation pruning is anticipated, trim in early spring before new growth.

Although it is relatively disease free, they are sometimes bothered by cankers or needle blight. Cut out any branches afflicted with cankers. Needle blight causes yellowing of the branches and green pustules near the tip of the stems. To combat this disease, spray the tree with a copper fungicide every ten days.

Although drought tolerant once established, if you are experiencing a dry winter, it is best to water your ‘Murray’ cypress twice a month in the absence of rain.

Printer Friendly Version
Read more about Cypress
<Previous
Did you find this helpful? Share it with your friends!
FacebookTweetPinEmail
Related Articles
Newest Articles
You might also like…
Additional Help & Information