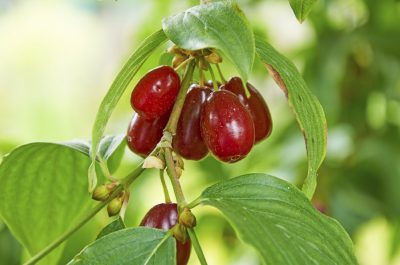 What is a Cornelian Cherry Plant?

Cornelian cherries (Cornus mas) are actually members of the dogwood family and native to areas of Eastern Europe and Western Asia (they even survive in Siberia!). They are shrub-like trees that can grow up to 15-25 feet (4.5 to 7.5 m.) in height if left unpruned. The plant can live and be fruitful for up to 100 years.

They bloom early in the season, even prior to forsythia, and bloom for an extended period of time, carpeting the tree in a yellow haze of tiny blossoms. The bark of the tree is flaky, gray-brown to brown. Bright green glossy leaves turn purplish-red in the fall.

How to Grow Cornelian Cherry Trees

While historically significant, cornelian cherries have not been mass produced due to the elongated pit inside the fruit that is difficult to remove, as it is firmly entrenched in the pulp. More often, the trees are seen as ornamental specimens, popular and planted around the 1920s.

Cornelian cherry cultivation is suited to USDA zones 4-8. The trees do best in full sun to part shade and while they do well in a variety of soils, they prefer fertile, well-draining soil with a pH of 5.5-7.5. This adaptable plant is winter hardy to -25 to -30 degrees F. (-31 to -34 C.).

The tree can be pruned and trained into a single-stemmed tree if desired and is primarily insect and disease resistant with the exception of dogwood anthracnose.

Printer Friendly Version
Read more about Dogwood
<PreviousNext>
Did you find this helpful? Share it with your friends!
FacebookTweetPinEmail
Related Articles
Newest Articles
You might also like…
Additional Help & Information