What Are Wooly Adelgids: Learn About Hemlock Woolly Adelgid Treatment 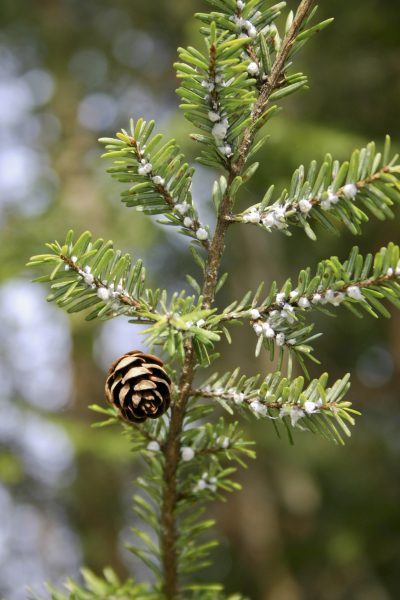 What are Woolly Adelgids?

Only about a sixteenth of an inch (2 mm.) long, woolly adelgids (Adelges tsugae) have a huge impact on hemlock trees in the eastern part of North America. Their feeding practices cause needles and branches to brown and die, and if the infestation is left untreated, the tree starves to death. Here are some interesting facts about these tiny pests:

The woolly adelgid is an aphid-like insect that can grow and reproduce on all types of hemlocks, but only the eastern and Carolina hemlocks decline and die from an infestation. Watch closely for hemlock woolly adelgid damage. Early detection gives your tree a much better chance of survival.

The insects feed by sucking sap from hemlock needles, and the needles die one by one. If nothing is done to stop the infestation, the entire branch may die. Here is a season-by-season list of danger signs:

The best treatment of woolly adelgids on a small tree is to spray the tree with horticultural oils. Spray in spring after the eggs hatch but while the insects are still crawling and follow the label instructions. This method won’t work on large trees. They should be treated with a systemic insecticide by injection or soil treatment. These are short-term solutions.

The treatment must be repeated every year. There are no good organic treatment methods, but scientists are working with some of the woolly adelgid’s natural enemies to see if they can be used to protect hemlock trees.

Printer Friendly Version
Read more about Hemlock
<PreviousNext>
Did you find this helpful? Share it with your friends!
FacebookTweetPinEmail
Related Articles
Newest Articles
You might also like…
Additional Help & Information