What To Do With Lychees: Learn How To Use Lychee Fruits 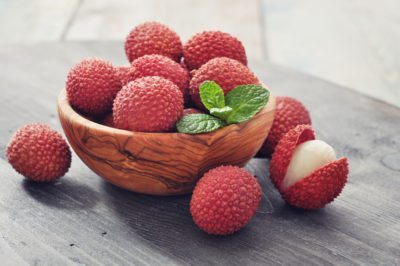 Native to Asia, lychee fruit looks like a strawberry with bumpy reptilian looking skin. It has been a favored fruit in China for more than 2,000 years but is a rarity in the United States. They can be grown in the warmer states of Florida and Hawaii and are also available canned, dried, and fresh at specialty Asian grocers. Once you’ve acquired them though, the question may be what to do with lychees. Lychee fruit has many uses. Read on to find out about using lychee fruit.

How to Use Lychee

Lychee fruit has a lovely, sweet taste rather like a cross between strawberries, watermelon, and grapes, but before using lychee fruit, it needs to be prepared. The tough outer skin is peeled like a grape to reveal a pearly white interior pulp.

The flesh is surrounded by a large inedible seed that should be removed and discarded. Now you’re ready to use the fruit, but how to use lychee is the question.

What to Do with Lychees?

Fresh lychees can be kept in the refrigerator for up to two weeks, or they can be canned or frozen to extend their usage. They are commonly eaten fresh by themselves or added to fruit salads. They are stuffed with cottage cheese and served as a salad with dressing and nuts or stuffed with cream cheese and mayonnaise.

They are often used in desserts, layered with pistachio ice cream and whipped cream or used in mousses or even added to cakes. They can be found in gelatin salads or pureed to flavor ice cream or sherbet. Sherbet is made by juicing the lychees and then adding the juice to plain gelatin, hot milk, light cream, sugar, and lemon juice and then freezing.

Lychees are commonly found canned wherein the fruit is combined with sugar syrup and a small percentage of tartaric or citric acid to prevent discoloration. Dried lychees, called lychee or litchi nuts, are also popular and are similar to raisins. Dried lychees can be stored for up to a year and are then used as a snack or chopped into fruit or green salads. Many Chinese use dried lychee instead of sugar to sweeten their tea.

Less commonly, lychees may be spiced or pickled or made into sauces, preserves, or even wine. Lychees are quite high in vitamin C, as well as vitamin B, potassium, thiamin, niacin, folate, and copper, making them a healthy food choice. They make a refreshing and nutritious smoothie by combining yogurt, honey, chopped lychees, fresh lime, powdered cardamom, and ice cubes blended until smooth and frothy.

Lychee has also been used for medicinal purposes throughout history. Lychee fruit is rich in dietary fiber, which not only helps us maintain a healthy weight, but keeps us regular. As mentioned, it is loaded with vitamin C, which protects against colds and other infections as well as fighting inflammation and helping the body develop resistance.

Tea is sometimes made from the skins of lychee fruit to treat smallpox and diarrhea. The seeds are ground in India to treat stomach ailments. Sore throats are treated with a decoction of bark, root, and lychee blossoms.

There is some evidence that lychees may treat coughing, abdominal issues, tumors, and swollen glands. Seeds of lychee are prescribed for inflammation of the testes and neuralgia pain.