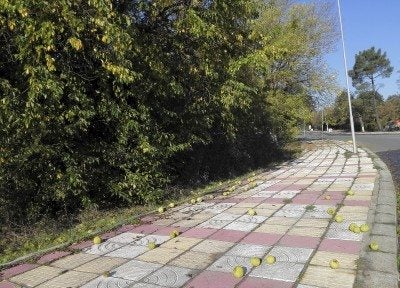 The Osage orange tree is native to North America. It is said that the Osage Indians made hunting bows from the beautiful hard wood of this tree. An Osage orange is a fast grower, and rapidly gets to its mature size of up to 40 feet (12 m.) tall with an equal spread. Its dense canopy makes it an effective windbreak.

If you are interested in planting an Osage orange hedge row, you’ll need to learn about techniques for pruning Osage orange trees. The tree’s thorns present special pruning issues.

Barbed wire wasn’t invented until the 1880’s. Before then, many people planted a row of Osage orange as a living fence or hedge. Osage orange hedges were planted close together – no more than 5 feet (1.5 m.) – and pruned aggressively to encourage bushy growth.

Osage orange hedges worked well for cowboys. The hedge plants were tall enough that horses wouldn’t jump over them, strong enough to prevent cattle from pushing through, and so dense and thorny that even hogs were kept from passing between the branches.

Osage orange pruning is not easy. The tree is a relative of the mulberry, but its branches are covered with tough thorns. Some thornless cultivars are currently available in commerce, however.

While the thorns have given the tree its reputation as a good plant for a defensive hedge, using Osage orange as a living fence requires regular interaction with thorns so strong that they can easily flatten a tractor tire.

Don’t forget to put on heavy gloves, long sleeves, and full-length pants in order to protect your skin from the thorns. This also acts as protection against the milky sap that can irritate your skin.

When you first plant an Osage orange hedge row, prune the trees every year in order to help them to develop a strong structure. Prune out competing leaders, retaining only one strong, upright branch with evenly-spaced scaffold branches.

You’ll also want to remove dead or damaged branches every year. Prune out branches that rub against each other as well. Don’t neglect to trim away new sprouts growing out of the base of the tree.