Cutting Back A Plane Tree: How To Prune A London Plane Tree 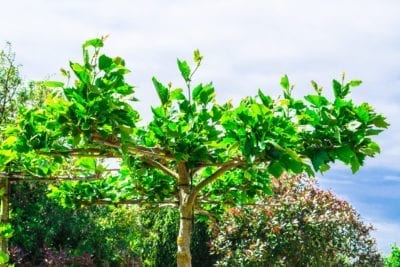 Timing of pruning is a crucial detail when cutting back a plane tree. Knowing when to prune plane trees as well as how can impact the plant’s health. Clean implements and sharp blades help prevent disease and insect intrusion. Some tips on London plane tree trimming will help you keep your stately plant in shape.

In some areas, London plane trees are on every boulevard. This is due to their rapid growth, relative resistance to disease, and hardy constitution. Plane tree pruning is useful to control that growth, remove dead or diseased material, and promote a strong form. The plants are very tolerant of pruning and can be trained to a variety of forms, but each form requires a different timing for cutting back a plane tree.

Pollarding is an ancient practice. It seeks to remove the new shoots to promote the growth of the main stems and prevent smaller woody material. The effect is quite dramatic. To achieve it, prune a London plane tree in late fall or early winter. Use well-honed blades that are sanitized and make cuts above the old growth.

Take out all the young, tip end new season’s growth. The gnarled, burled old stems produce an interesting form. This type of pruning will need to be done annually to preserve the shape. At the same time, remove any damaged larger stems.

Making a Canopy Out of Plane Trees

A canopy form is an elegant, fun shape that plane trees respond to easily. For this type of plane tree pruning, you will first trim the tree when young in spring to promote a tall trunk. Remove the lowest side branches. Do this gradually over several seasons.

This type of London plane tree trimming requires a saw. Make cuts first part way through on the underside and then finish on the top of the stem to prevent tearing. Cut just outside of the branch collar to prevent damaging that important scar. Some experts suggest treating the cut with sealant to prevent insect and fungal infections.

Follow up with trimming in autumn just as the leaves are falling. This allows you to see the form and train the canopy.

Juvenile trees should be cut in early fall. This is usually before leaves have started dropping and will allow you to see the form you are trying to create. Most young trees need both loppers and a saw to make cuts. Avoid vigorous, overly aggressive cuts as you train young trees.

They will need careful management for the first three to four years to develop a straight, thick main stem and upright, strong branches. The general rule for pruning is to remove no more than one third of the plant material in one year. To do this can sacrifice the health of the tree.

Plane trees are, however, very forgiving of heavy pruning at almost any time of the year.