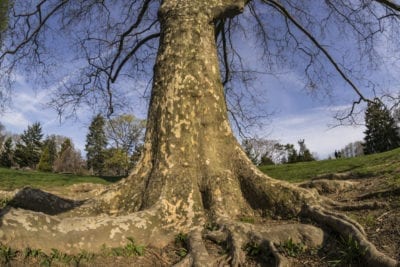 London plane trees are highly adapted to urban landscapes and, as such, are common specimens in many of the world’s largest cities. Unfortunately, the love affair with this tree seems to be coming to an end due to problems with plane tree roots. London plane tree root issues have become quite a headache for the municipality, denizens of the city, and arborists with the question of “What to do about plane tree roots?”.

The problem with plane tree roots should not be blamed on the tree. The tree is doing what it has been prized for: growing. London plane trees are valued for their ability to thrive in urban settings in cramped quarters surrounded by concrete, lack of light, and assaulted by water that is tainted with salt, motor oil, and more. And yet they flourish!

London plane trees can grow up to 100 feet (30.5 m.) in height with a canopy spread the same. This enormous size makes for a sizable root system. Unfortunately, as with many trees that mature and reach their potential height, London plane tree root problems become obvious. Walkways become cracked and rise up, streets buckle, and even structural walls become compromised.

What to Do About London Plane Tree Roots?

Many ideas have been discussed around on the subject of how to deal with London plane tree issues. The fact is there are no easy solutions to the problems caused by existing trees.

One idea is to remove sidewalks damaged by the root system and to grind the roots of the tree and then replace the walkway. Such severe damage to the roots could weaken a healthy tree to the point that it becomes dangerous, not to mention that this would only be a temporary measure. If the tree remains healthy, it will only continue to grow, and so will its roots.

When possible, space has been expanded around existing trees but, of course, that isn’t always practical, so often the offending trees are simply removed and replaced with a specimen of shorter stature and growth.

The problems with London plane roots have become so severe in some cities that they have actually been outlawed. This is unfortunate because there are very few trees that are as suited to an urban environment and are as adaptable as the London plane.