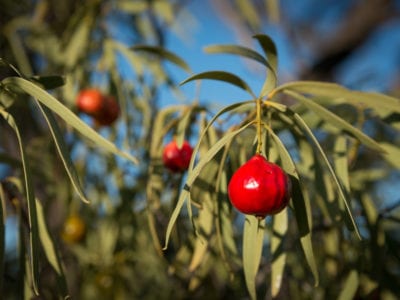 What is a quandong tree? Quandong fruit trees are native to Australia and vary in size from 7 to 25 feet (2.1 to 7.6 m.) in height. Growing quandong fruit is found in the semi-arid regions of Southern Australia and are tolerant of both drought and salinity. Trees have drooping, leathery, light grey-green foliage. Insignificant greenish blossoms appear in clusters from October to March.

Desert quandong is categorized as a non-obligate root parasite, meaning that the tree uses the roots of other trees or plants to garner its nourishment. This makes growing quandong fruit difficult to cultivate commercially, as there must be suitable host plants co-planted amongst the quandong.

Prized by the native Aboriginals for the bright red inch-long (2.5 cm.) fruit, quandong is an ancient specimen dating back to at least 40 million years ago. Growing quandong fruit may be present at the same time as blossoms, accounting for a lengthy harvesting season. Quandong is said to smell like dry lentils or beans if slightly fermented. The fruit tastes both mildly sour and salty with varying degrees of sweetness.

Fruit is picked and then dried (for up to 8 years!) or peeled and used to make delicacies such as jams, chutneys, and pies. There are other uses for quandong other than as a food source. Indigenous people also dried the fruit to use as ornamentation for necklaces or buttons as well as gaming pieces.

Up until 1973, quandong fruit was the exclusive province of the Aboriginal people. In the early 70’s though, the Australian Rural Industries Research and Development Corporation began to investigate the importance of this fruit as a native food crop and its potential for cultivation for distribution to a larger audience.