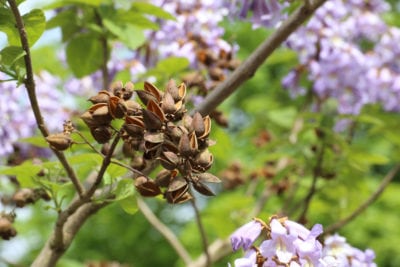 In springtime, Paulownia tormentosa is a dramatically beautiful tree. It bears velvety buds that develop into magnificent violet blossoms. The tree has many common names, including royal empress, and it is easy to propagate. If you are interested in growing royal empress from seed, as Mother Nature does, you’ll find that planting royal empress seeds is almost foolproof. Read on for more information about royal empress seed germination.

Paulwnia tormentosa is a very attractive, fast-growing tree and easy to grow in a home garden in the right environment. It bears trumpet-like flowers which are large, lovely, and fragrant in shades of blue or lavender. After the flower show in spring, the royal empress’s huge leaves appear. They are beautiful, exceptionally soft, and downy. These are followed by a green fruit that matures into a brown capsule.

The tree was introduced into the U.S. during the 1800’s. Within a few decades, it naturalized across the eastern side of the country via Paulownia seed propagation. The tree’s fruit is a four-compartment capsule containing thousands of tiny winged seeds. A mature tree produces some 20 million seeds every year.

Since the royal empress tree readily escapes cultivation, it is considered an invasive weed in some places. This raises the question: should you plant royal empress seeds at all? Only you can make that decision.

In the wild, seeds of royal empress trees are nature’s propagation method of choice. Royal empress seed germination is quite easy to achieve in most regions of the country. So, if you are growing royal empress from seed, you’ll have an easy time.

Those sowing seeds of royal empress will need to remember that the seeds are tiny. That means that you’ll have to make an extra effort to sow them thinly to prevent crowded seedlings.

One way to proceed with royal empress seed germination is to place them on a tray on top of compost. The seeds of royal empress require sunlight to germinate so don’t cover them with soil. Keep the soil moist for a month or two until you see that they are germinated. Covering the tray in plastic holds moisture in.

Once the seeds germinate, remove the plastic. The young seedlings shoot up fast, growing to 6 feet (2 m.) in the first growing season. With any luck, you may go from royal empress seed germination to enjoying the showy flowers in as little as two years.

If you are wondering where to plant Paulownia, pick a sheltered location. It’s a good idea to shield royal empress from strong wings. The wood of this quick-growing tree isn’t very strong and limbs can split off in gales.

On the other hand, royal empress trees don’t require any particular type of soil. Another good point is that they are drought tolerant.

Printer Friendly Version
Read more about Royal Empress
<Previous
Did you find this helpful? Share it with your friends!
FacebookTweetPinEmail
Related Articles
Newest Articles
You might also like…
Additional Help & Information