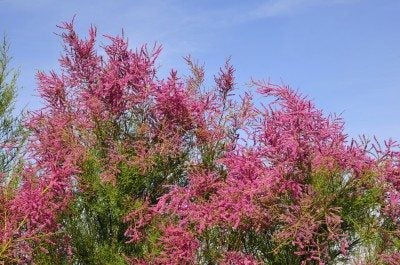 What is Tamarix? Also known as tamarisk, Tamarix is a small shrub or tree marked by slender branches; tiny, grayish-green leaves and pale pink or off-white blooms. Tamarix reaches heights of up to 20 feet (6 m.), although some species are much smaller. Read on for more Tamarix information.

Tamarix (Tamarix spp.) is a graceful, fast-growing tree that tolerates desert heat, freezing winters, drought, and both alkaline and saline soil, although it prefers sandy loam. Most species are deciduous.

Tamarix in the landscape works well as a hedge or windbreak, although the tree can appear somewhat scruffy during the winter months. Because of its long taproot and dense growth habit, uses for Tamarix include erosion control, particularly on dry, sloped areas. It also does well in saline conditions.

Before planting Tamarix, keep in mind that the plant has a high potential for invasiveness in USDA growing zones 8 through 10. Tamarix is a non-native plant that has escaped its boundaries and, as a result, has created serious problems in mild climates, especially in riparian areas where the dense thickets crowd out native plants and the long taproots draw large amounts of water from the soil.

The plant also absorbs salt from the groundwater, accumulates it in the leaves, and eventually deposits the salt back to the soil, often in concentrations high enough to be harmful to the native vegetation.

Tamarix is extremely difficult to control, as it spreads by roots, stem fragments, and seeds, which are dispersed by water and wind. Tamarix is listed as a noxious weed in nearly all western states and is extremely problematic in the Southwest, where it has severely reduced underground water levels and threatened many native species.

However, Athel tamarix (Tamarix aphylla), also known as saltcedar or athel tree, is an evergreen species often used as an ornamental. It tends to be less invasive than other species.