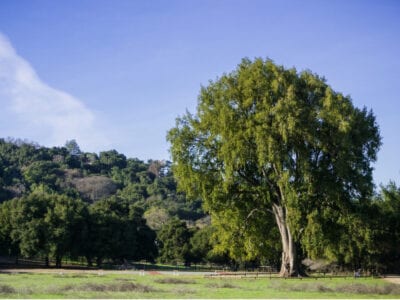 California Bay Laurel tree is a long-lived, versatile, aromatic broadleaf evergreen that is native to Southern Oregon and California. It is suited for specimen or hedge plantings, as well as container culture.

What Is a California Laurel

A California Bay Laurel tree (Umbellularia californica) forms a rounded or pyramidal dense crown and can reach heights of 148 feet (45 m.), but typically reaches 80 feet (24 m.). Its glossy, leathery, yellow-green leaves give off a peppery, menthol odor when crushed. Small, yellow-green flower clusters appear from fall through spring, depending on its location, followed by olive-like purple-brown fruits, which can become a nuisance when dried fruits fall to the ground.

Hardy in USDA zones 7-9, California bay laurels are an important wildlife plant, providing food and cover for large and small mammals who eat the leaves, seeds, and roots of the tree.

The trees also are used in conservation efforts to restore wildlife habitat, riverbank vegetation and flood controls. California laurel trees are grown for their high-quality wood that is used for furniture, cabinetry, paneling, and interior trim. There is a long history of medicinal and food uses of the tree by the indigenous Cahuilla, Chumash, Pomo, Miwok, Yuki, and Salinan California tribes. Their leaves are used as seasoning in soups and stews as an alternative to the more common sweet bay leaves.

The best situation for growing California Bay Laurels requires a full sun to shady location, with well-drained fertile soil and regular irrigation. However, the widely adaptable trees tolerate some dryness when established, but may die back in drought conditions. Even though the’re evergreen, they still drop many leaves, particularly in autumn.

Remove suckers as they emerge to maintain a single trunk, and the canopy may be trimmed if desired to reduce its fullness.

California Bay Laurel tree is relatively unaffected by insect pests but can be bothered by aphids, scale, thrips, white fly, and leaf blotch miner. Heart rot, caused by a fungus, can be treated by cutting down the infected tree to about 8 inches (20 cm.) and letting it regrow from sprouts.

California Bay should not be confused with the true bay leaves used for flavoring, bay laurel, which is native to the Mediterranean region. California Bay is sometimes used as a substitute for bay leaves, but the flavor is more robust.