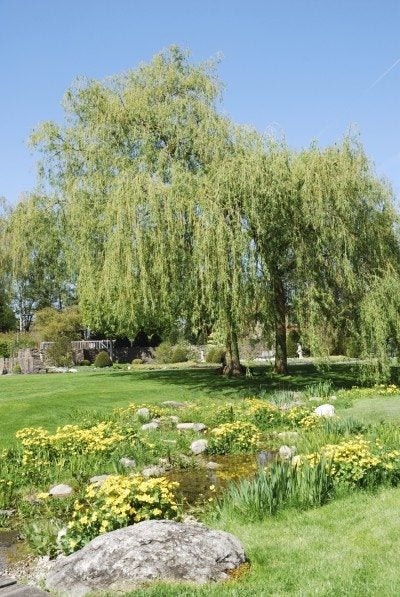 Is there anything more graceful than the profile of a weeping tree? Their drooping branches add a note of peace and tranquility to the garden. Small weeping trees make excellent focal points for the garden because their exotic appearance draws the observer’s attention. If you aren’t sure which weeping trees are right for your garden, we’re here to help. This article discusses some of the different types of weeping trees for landscaping, along with their advantages.

What are Weeping Trees?

Weeping trees have branches that droop toward the ground. They often carry the species or cultivar name “Pendula” because of their hanging branches. Very few trees weep naturally. Weeping is generally caused by a mutation that does not grow true from seeds.

Weeping trees are often grafted onto species rootstock because the species is usually more vigorous than the mutation. Be careful to remove root suckers as they appear because any species trees that grow from the suckers can overtake the weeping tree. Other than controlling suckers, the care of weeping trees is easy because they require little or no pruning.

You’ll find many different types of weeping trees, including both deciduous and evergreen trees, small garden trees and large shade trees, trees for sun or partial shade, and flowering and fruiting trees. Here are some weeping trees and shrubs to consider for your landscape: