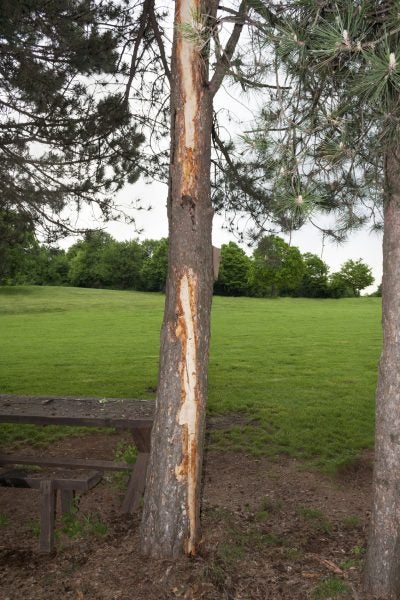 A tree is often the tallest spire around, which makes it a natural lightning rod during storms. Some 100 lightning strikes happen every second around the world, and that means there are more trees hit by lightning than you might have guessed. Not all trees are equally vulnerable to lightning strikes, however, and some trees struck by lightning can be saved. Read on to learn about repairing lightning-damaged trees.

Lightning damage in trees is instantaneous. When lightning strikes, it turns the liquids inside the tree to gas instantly, and the tree bark explodes. Some 50% of trees hit by lightning die immediately. Some of the others become weakened and susceptible to disease.

Not all trees have an equal chance of getting hit. These species are commonly hit by lightning:

Birch and beech rarely get hit and, because of that, suffer little lightning-struck tree damage.

Lightning damage in trees varies widely. Sometimes, a tree splinters or shatters when hit. In other trees, lightning blows off a strip of bark. Still, others appear undamaged, yet suffer unseen root injuries that will kill them in short order.

Whatever amount of damage you see on a tree after lightning strikes, remember that the tree has been severely stressed, so knowing how to save a tree struck by lightning in this instance is imperative. There is no guarantee of success when you begin repairing lightning-damaged trees. However, in some cases, it is possible.

When trees suffer the stress of being hit by lightning, they require additional nutrients to heal. The first step in overcoming lightning damage to trees is to give the trees generous amounts of water. They can take up supplemental nutrients with supplemental irrigation.

When you are repairing lightning-damaged trees, give them fertilizer to stimulate new growth. Trees hit by lightning that survive until spring and leaf out are very likely to recover.

Another way to start repairing lightning-damaged trees is to prune out broken branches and torn wood. Don’t do extensive pruning until a year has passed so that you can assess the actual damage done.