What Is A Samara And What Do Samaras Do 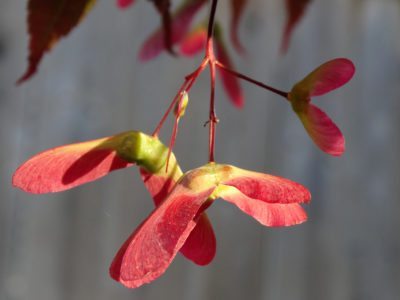 What is a Samara?

A samara is just one type of many fruits produced by flowering plants. The samara is a dry fruit, as opposed to a fleshy fruit, like an apple or cherry. It is further categorized as a dry indehiscent fruit. This means that it does not split open to release the seed. Instead, the seed germinates inside of its casing and then breaks free of it as the plant grows.

A samara is a dry indehiscent fruit with a casing or wall that extends to one side in a wing-like shape – in some plants the wing extends to both sides of the seed. Some samara fruits split into two wings, technically two samaras, while others simply form one samara per fruit. The wing causes the fruit to move through the air while spinning, like a helicopter.

As a kid you probably threw samaras from maple trees up in the air to watch them spin back down to the ground. You may have called them helicopters or whirlybirds.

What Do Samaras Do?

The purpose of samara fruits, as with all fruits, is to disperse seeds. The plant reproduces by making seeds, but those seeds need to find their way into the ground so they can grow. Seed dispersal is a big part of flowering plant reproduction.

Samaras do this by spinning to the ground, sometimes catching the wind and traveling farther. This is ideal for the plant because it helps it spread and cover more territory with new plants.

Due to the way they are shaped, samaras are very good at traveling long distances on wind power alone. They can end up far from the parent tree, which is a great reproductive technique.

Examples of trees that produce samaras with a wing to just one side of the seed are maple and ash.

Those with samaras that produce the wing to both sides of the seed include tulip tree, elm, and birch.

One of the few legumes to produce a samara is the tipu tree of South America.