What Is A Witness Tree And Where To Find Them 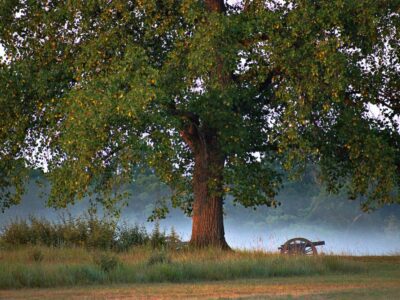 It is easy to forget our nation’s violent beginnings. Since the earliest of these occurred over two centuries ago, the human witnesses that could remind us of the tragedies of war have passed. However, some living beings still exist that bear witness to these battles: the trees. Witness trees are those trees, living today, that were alive during dramatic events in our nation’s past.

Witness trees are trees that were in place as noteworthy events occurred around them. Sadly, these events in the history of the United States are largely without exception tragic ones, important or particularly bloody battles that saw many soldiers die.

The trees were usually young at the time of the battles, and stand now as mature, silent guardians of the memories they absorbed. They are meaningful to many people touched by the losses, so much so that in 2006 the National Park Service created the Witness Tree Protection Program.

The Witness Tree Protection Program safeguards important trees in the greater Washington, D.C. area. Many of these trees were battleground witnesses. The protected trees include numerous Civil War witness trees. To be a Witness Tree of the American Civil War these trees must be over 150 years old.

Some are well-known and famous, such as the Antietam witness tree. This American Sycamore was a sapling during the bloodiest battle in the Civil War, and still stands today next to Burnside’s Bridge.

The area around Gerrysburg contains many witness trees. In fact, no one knows the exact number of witness trees here, and some are discovered only after the tree has fallen. For example, after an old oak tree fell in 2011, bullets from the war were found lodged inside the trunk.

Another famed witness tree is a black walnut tree that grew in the middle of the field that was at the center of the most pivotal moment in the war, Pickett’s Charge. The rebels began the charge from under that tree, that still stands today, and its lost neighbors.

Confirmed witness trees are precious and visiting them can be an emotional experience. The trees lived through trauma and survived. Many travelers go out of their way to visit these trees and remember the histories they were part of. While some trees can live centuries, these witnesses are ephemeral, since nobody can say how much longer they may survive.