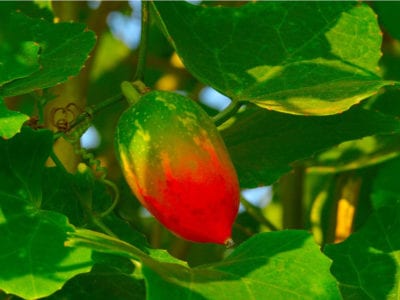 In tropical areas, like Hawaii, the scarlet ivy gourd vine has become a problematic invasive species. In a single day these vines can grow up to 4 inches (10 cm.). It’s a vigorous climber which engulfs trees, smothering them with thick, sun blocking foliage. Its deep, tuberous root system is difficult to remove, and it doesn’t respond well to glyphosate herbicides.

The vine propagates easily by roots, stem pieces, and cuttings. Seed dispersal by birds can spread the scarlet ivy gourd vine far from the perimeters of cultivated gardens. The vine grows in most types of soils and can set up residence alongside roads and in wastelands.

Inside USDA hardiness zones of 8 to 11, the perennial scarlet ivy vine can grow unrestricted from any natural enemies in areas where it has been introduced. Biological control methods, from its native habitat in Africa, have been released in the Hawaiian Islands as a means of controlling this invasive weed.

What is a Scarlet Ivy Gourd?

A native of tropical regions in Africa, Asia, and Australia the scarlet ivy gourd vine is a member of the cucurbitaceae family and is related to cucumbers, pumpkins, squash, and melon. It has many names in different languages, but in English it’s also called a baby watermelon. This nickname comes from the watermelon-like appearance of the green, unripe fruit.

Is ivy gourd fruit edible? Yes, ivy gourd fruit is edible. In fact, in some areas, the vine is cultivated just for the sale of the fruit, which has a crisp, white flesh with a cucumber-like taste and is usually harvested in the immature green fruit stage.

When the fruit is green, it is often added to curries and soups while ripe fruit can be eaten raw or stewed with other veggies. The tender leaves are also edible and can be blanched, boiled, stir fried, or added to soups. The tender shoots of the vine are even edible and rich in Beta carotene, riboflavin, folic acid, and ascorbic acid.

It provides a dietary source of fiber, calcium, iron, thiamine, and riboflavin. Reports indicate consuming the ivy gourd can help improve glucose tolerance and the fruit is beneficial for controlling blood sugar levels in diabetics.

Additional scarlet ivy gourd uses in natural medicine include harvesting the fruits, stems, and leaves to treat abscesses and reduce high blood pressure. The plant is believed to contain antioxidant and antimicrobial properties.

Growing scarlet ivy gourds in climates which are colder than USDA hardiness zone 8 reduces the risk of cultivating a potentially invasive species. In these areas, scarlet ivy vines can be grown as annuals. It may be necessary to start seeds indoors in order to provide a sufficient growing season to produce fruit.