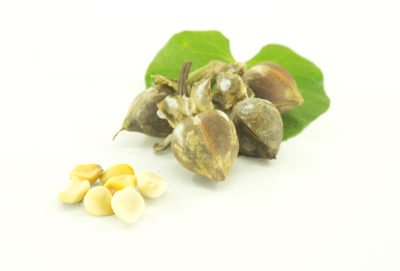 Moonflower is a plant in the Ipomoea genus, which includes over 500 species. The plant is an annual in much of North America but is easy to start from seed and has a very rapid growth rate. Moonflower seed pods contain several chambers and numerous flat black seeds. They must be collected prior to winter and started in early spring in most of our zones. Propagating moonflower vine seeds is the only way to replicate the vines, as vegetative reproduction is not viable. Learn when and how to harvest and plant moonflower seeds.

How Do I Harvest Moonflower Seeds?

Moonflower is a photo-responsive plant, which opens its flowers in the evening only, while its cousin, morning glory, only opens its blooms early in the day. Both produce rampant, twining vines, and lovely old-fashioned flowers. While not winter hardy in most zones, moonflower grows so easily from seed that it will reestablish itself quickly when temperatures rise, and seedlings take off. The persistent seed pods make harvesting moonflower seeds simple, and the seed can remain viable for two years if stored properly.

The first step in acquiring the seed is to identify moonflower seed pods. These are teardrop-shaped and start out green, becoming husk-like and brown at maturity. You must watch the pods daily, as seeds aren’t ripe until the pod becomes brown, but the pod will almost immediately split at several points in the side and spill the seed. This makes moonflower seed harvesting a dance on a pin as you try to time the right period for collection.

If you have several varieties, collect pods from each and label them carefully. Additionally, only select pods from healthy, vigorous vines to increase the chances of successful sowing in spring. As soon as the pod is mostly brown, remove it from the plant and further dry it in a warm, dry location.

Wait until the pods are completely dry before taking out the seeds. Check pods carefully for any sign of mold, disease, or insect activity and reject those that have any indications they are not healthy.

When pods are dry, split them open and shake the seeds into a bowl. Dry seed further in a single layer for up to a week. Then you are ready to store the seed. Package seed in a glass container or plastic bag. Remove any wrinkled or discolored seeds, as they are not viable.

Label your containers and store the seed for up to two years in a cool, dark location that will not freeze, such as a basement or insulated garage. If storing for more than a few months, check bags several times in the year to ensure no mold or issues are developing.

Moonflowers will grow very quickly, but seeds need a long growing season to develop. In USDA zones 6 and 7, the plant will thrive and produce flowers more quickly if sown indoors. In zones 8 to 9, the seed can be directly sown into garden beds outside.

To sow indoors, prepare 2-inch (5 cm.) pots with good potting soil six to eight weeks before the date of your last frost. Then preparation of the seeds begins. Soak seeds overnight in water. Some gardeners swear by cutting the hard exterior of the seed a bit to help it absorb moisture and help the embryonic plant escape the shell. This is probably not necessary, but you can try it if you wish.

Sow seed ½ inch (1 cm.) below the soil surface and tamp in. Keep pots evenly moist in a well-lit area that is at least 65 degrees F. (18 C.). Most seed should germinate in three to four days.