What Are Tendrils For – Should Tendrils Be Removed From Vines 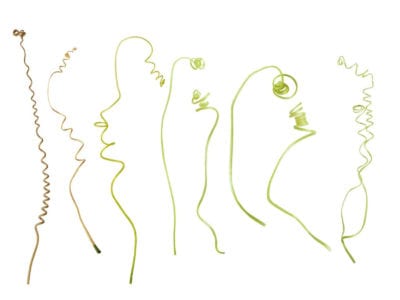 Climbing plants save space in the garden by growing vertically. Most gardeners have had one or more climbing plants in the garden that have tendrils. What are tendrils for? Tendrils on vine plants help the plant ascend much like a rock climber who needs hand and foot holds to scale up a mountain.

While climbing is the main purpose of tendrils, they may also have some negative consequences as well. Given that there are downsides to tendrils on vine plants, should tendrils be removed?

What are Tendrils for?

As mentioned, the purpose of tendrils on vines is to assist the plant in climbing but they can also photosynthesize, making them doubly valuable to the vine.

The tendrils of plants such as the sweet pea act as fingertips and “feel” around until they encounter a solid object. When they “touch” the object the tendrils contract and coil. This process is called thigmotropism. Once the tendril coils and grabs onto the object, it can adjust the amount of tension on the support.

Should Tendrils be Removed?

The purpose of tendrils is all well and good for the vine, but what about other plants? Turns out it’s a jungle out there and vines have a well-deserved reputation for invasion. The harmless-looking tendrils grow rapidly and can quickly wrap around their competitors, strangling them.

Tendrils of other plants, such as ivy, can wreak havoc on your house. They use their tendrils to climb but as they do so, these tendrils get wedged in cracks and crannies along the foundation and up the exterior walls of the home. This can cause damage to the exterior, but then again, so can removing tendrils from plants that have adhered to the home.

So, should tendrils be removed? Ideally, if you have a climber next to the home, you have provided a support for it to clamber up rather than up your exterior. If this isn’t the case, then carefully removing tendrils from plants that have adhered might be the only option. Certain sidings, such as stucco, are more susceptible to damage from the tendrils of plants.

To remove the tendrils, first, snip the roots of the vine from the ground or wherever the connection is. Next, cut 12 x 12 inch (30.5 x 30.5 cm.) sections of the vine that is growing up the house. Cut through both vertically and horizontally in this manner until you have a grid comprised of square-foot sections.

Let the grid of cut vines dry for two to four weeks and, once dry, gently pry it from the wall. If you meet with resistance, the vine is probably still green. Allow it to dry further. The whole process of killing the vine may take a month or longer. As the vine dries, continue to remove sections by hand.