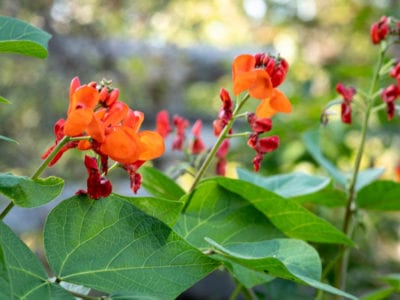 What are Scarlet Runner Beans?

So exactly what are scarlet runner beans? Scarlet runner bean plants, also known as fire bean, mammoth, red giant, and scarlet emperor, are vigorous climbing, annual vines that reach up to 20 feet (6 m.) in a season. This annual bean vine bears large, green leaves and an attractive cluster of red flowers from July through October.

The bean pods are large, sometimes up to 1 inch (2.5 cm.) in diameter and contain beans that are a beautiful pink when young and turn to a dark violet to black speckled with age. The beans are as attractive as the vines and flowers themselves.

Are scarlet beans edible? This is a common question concerning these plants. Although many people plant scarlet runner beans for their ornamental value, they are, in fact, edible.

While there is some argument over whether scarlet runner beans should be eaten raw when they are young, they can most certainly be lightly steamed in the pods and enjoyed as a snack like you would eat soy beans. The beans are easy to store and can be frozen after being blanched, stored in salt, or dried.

When Can I Plant Scarlet Runner Bean Vine?

How to Grow Scarlet Runner Beans

Scarlet runner beans should be planted in soil that is high in organic matter and in full sun. They grow quickly and require support. It is not necessary to tie these beans, as they will twine around anything close by.

The seeds are large and should be planted 2 to 3 inches (5 to 7.5 cm.) apart to minimize overcrowding. Once planted, scarlet runner bean care is easy.

Provide regular water throughout the growing season, but do not saturate the ground.

Also, you should watch for common pests that like to nibble on any bean plants. A light dusting weekly of diatomaceous earth will help keep most pests at bay.