What Are Smilax Vines : Tips For Using Greenbrier Vines In The Garden 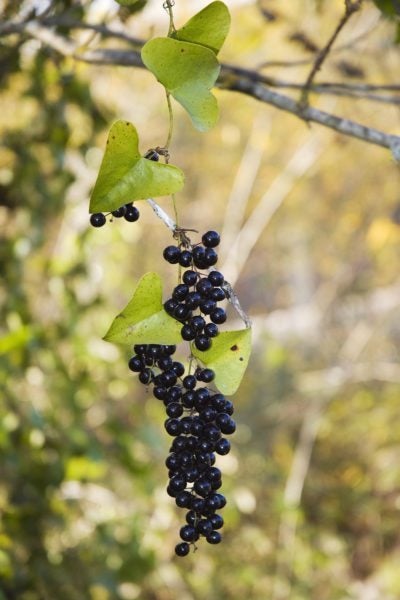 Smilax is becoming quite a popular plant lately. What are Smilax vines? Smilax is an edible wild plant that is making some inroads in the agriculture industry. All parts of the plant are nutritious and delicious. Smilax vines in the garden can provide a unique food source while adding natural beauty. The vines are cover and fodder for numerous wild birds and animals and its tubers, stems, leaves, and berries can all be used in various recipes.

Smilax is also known as greenbrier and occasionally carrion vine, due to its intense, slightly unpleasant scent. Other names for the plant include catbrier, bamboo vine, and Jackson vine. It is a common forage food found along the east coast of the United States. Smilax plant uses throughout history range from food to medicinal. Noteworthy in Smilax information references is its potential use to treat dementia and Alzheimer’s. Numerous clinical trials indicate it may have a range of medical uses as a natural remedy.

There are around 300 known species in the genus Smilax. The known and used form in the eastern and southern part of the U.S. is a briar vine. It is one of the few twining vines that bears thorns. In fact, Smilax roots were made into a pipe, hence the name for a pipe bowl was “brier.”

The plant prefers moist woods and is often seen climbing trees. Plants can also grow in slightly dry conditions and will become a literal briar patch if there is nothing but itself upon which to climb.

Smilax is an extremely vigorous plant with pinkish bamboo-like vines bearing small thorns. Leaves vary by species and may be lance, heart shaped or oblong, shiny, and leathery. It has thick knobby, white roots and bears tiny insignificant flowers. In late summer, flowers develop into smooth, round berries that start out green and mature to black, although some species have red berries.

Using greenbrier vines in the garden is best left to large spaces, as the plant has a tendency to take over. In rare instances, Smilax vine control in the form of slashing can keep the rampant plant in check for ornamental purposes, but it is generally best to leave it as a wild plant.

Smilax Vines in the Garden

As stated, using greenbrier vines as an ornamental is probably more trouble than it’s worth. However, with careful management, the plant can be a beneficial addition to the wild, native garden. The plant will scramble up anything that is nearby, making it useful to hide an old fence or outbuilding while creating a natural space for animals and birds.

The vines may be tied up and trained but some berry production may be sacrificed. It can also make a useful ground cover that will help stabilize soil and create homes for wild beasts. For the foraging gardener, Smilax vines in the garden as part of an edible landscape provides numerous food options for vegetarians, vegans, or simply natural food enthusiasts.

NOTE: Before planting anything in your garden, it is always important to check if a plant is invasive in your particular area. Your local extension office can help with this.

In addition to its medicinal potential, Smilax can be made into numerous recipes. The young shoots are excellent eaten raw or as you would asparagus. Berries are delicious raw or cooked into a jam or jelly. Roots can be ground, dried, and used like flour. The roots can also be used like any root vegetable– boiled, stewed, or roasted.

Roots were also ground and used in Sarsaparilla or as an addition to flavor root beer. Additionally, they were used to thicken soups, sauces, and stews. Young leaves can be eaten both raw and cooked like spinach. This beneficial plant has a host of health benefits, being high in vitamins and starch as well as several important minerals.

Disclaimer: The content of this article is for educational and gardening purposes only. Before using or ingesting ANY herb or plant for medicinal purposes or otherwise, please consult a physician or medical herbalist for advice.