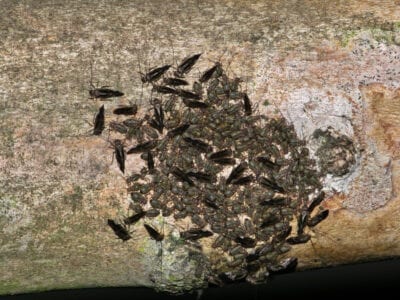 You’ve probably noticed bark lice webbing at one time or another in your trees. While unsightly, this often leads homeowners asking, “Do bark lice insects damage trees?” To find this out, as well as whether bark lice treatment is necessary, keep reading to learn more.

What is Bark Lice?

Many people raise an eyebrow when they think of a lice infestation. Bark lice is not the same as parasitic lice found on humans and animals. Bark lice are minute brown insects that have a soft body and are similar in appearance to aphids.

They are not really lice at all and have probably acquired that name only because they are so tiny and hard to see. Adults have two pairs of wings that are held over the top of the body like a hood when not in use. These tiny insects also have a long and thin antenna.

Bark lice live together in groups and are master web spinners. Back lice webbing, although unsightly, causes no damage to trees. The webbing can be extensive, covering the entire trunk of the tree and extending to the branches.

While you may find some of the bark lice on other areas of the tree, they normally live in large communities within the silky this bark lice webbing.

The lice do not actually hurt trees and are often thought of as helpful because they clean trees by eating things that your tree does not need like fungi, algae, mold, dead plant tissue, and other debris. Bark lice actually devour their silken webbing at the end of the season as well, completing their job as cleanup crew.

Bark lice treatment is unnecessary, as these insects are not really considered pests. Some homeowners will spray a heavy stream of water on the webs to disturb the colony. However, since the insects are beneficial, it is suggested that they be left alone.

Now that you know a little more about bark lice in trees, you can see that they are nothing to be alarmed about.